This article is about the Batman character. For the animal, see Penguin.

“Sorry to rain on your parade, my dear!”
―The Penguin in LEGO Batman 2

The Penguin is an enemy of Batman's and a chief crime boss in Gotham City. He was released in 2006 as a part of the Batman theme. He was redesigned and appeared in DC Universe Super Heroes theme in 2013 through 2016.

Unlike most minifigures from the original Batman theme, The Penguin is not based on his appearance from Batman: The Animated Series. Other minifigures who are not include Catwoman and Killer Croc. The reason Penguin and Catwoman are not is possibly because their appearances in that show were based on Batman Returns and Warner Brothers insisted those designs be used on that show, rather than the depictions the creators wanted.[1]

The Penguin is made out of four LEGO parts including a Black Top Hat, a Light Flesh head with a monocle, large eyebrows, and a wide grin, a Black torso which depicts a suit with an orange vest and purple bow-tie with White hands, and Purple Short Legs.

In 2013 Penguin received a redesign. He has lighter purple short legs, a black jacket closed with one button. A grey vest is showing from the bottom and a white shirt and a light purple bow tie at the top. He has back printing depicting the suit on his back, and little indent with the grey vest showing through, and the white shirt at the bottom. His eye now shows through his monocle and he has a less detailed mouth, but more lines around his face. He still wears a black top hat.

He comes with a silver fish and an open umbrella made from a black wand and a black radar dish.

He comes with the same hat and face as the previous version. The torso is all black with white hands and a white shirt with a regular purple tie and his suit is printed with a brown fur. His back is printed with fur and the creases in the jacket. He has medium stone grey short legs.

The design of the umbrella is the same but with a brown handle. This version also includes a device to control his Penguin Minions.

In LEGO Batman: The Videogame, Penguin's appearance is identical to his appearance in 7783 The Batcave: The Penguin and Mr. Freeze's Invasion, but his umbrella has been remodeled. His umbrella is now a Black 4L Bar and 3 by 3 radar dish in Purple when opened, or a never-released "closed umbrella" piece when closed. 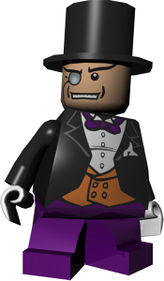 The Penguin in LEGO Batman: The Video Game

Penguin reappears in LEGO Batman 2: DC Super Heroes with a slight redesign of his Batman appearance. His face has been slightly changed and now no longer has the cheek lines, the eyebrows, and his teeth aren't as distinct as before. He also has back printing, a similar design to the Lex Luthor minifigure. His umbrella is also a lighter shade of purple and thicker.

On the Playstation Vita device though, he seems to have his exact Batman appearance, except his legs seem to be of the normal variety.

The corpulent and aristocratic Oswald Chesterfield Cobblepot, came to be The Penguin, Gotham City's "Gentleman of Crime" as a result of his traumatic upbringing. Ostracized as a child for his pointed nose, obesity, and short stature, The Penguin does not share the insanities or obsessions of most of Gotham's rogues, though he is particularly fond of birds. He owns the Iceberg Lounge and operates it as a front for various underground rackets and crooked schemes. Trained in judo, his weapons of choice are his collection of trick umbrellas, which conceal various weapons, gasses, and gadgets.

In LEGO Batman: The Videogame, Penguin was a boss on the level Penguin's Base where he is fought alongside Catwoman and many Freeze Girls. Penguin is a playable character in every ground villain level in Power-Hungry Penguin and unlocked after the level Rockin' the Docks is complete.

Penguin has the ability to glide and release penguin bombers from under his top hat. He is armed with one of his trick umbrellas which allows him to glide and acts as both a melee and ranged weapon.

The Penguin led a team which also consisted of Bane, Man-Bat, Killer Croc, and Catwoman. The team planned to unleash an army of Penguin Minions on Gotham City. 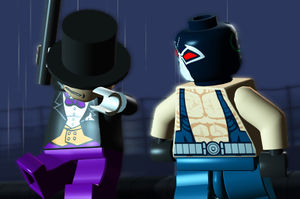 Penguin and Bane went to the city docks to retrieve a satellite dish being delivered. Once the satellite was fastened onto Penguin's submarine, Commissioner Gordon and the Police arrived. Penguin abandoned Bane to bring himself and the satellite to safety. This put Bane into fit of rage. He threw a police car into the air, which landed on him, knocking Bane out.

While searching for Catwoman, Penguin was spotted by a Police Boat, he summoned Killer Croc to help escape the police. After doing so, they were pursued by Batman and Robin, which resulted in the destruction of Penguin's Submarine. 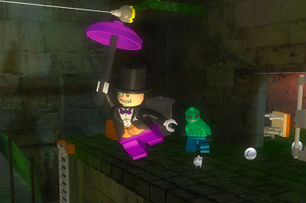 In an attempt to evade the Dynamic Duo, Penguin and Croc escaped into the sewer where they received a message from Catwoman who was looking to be freed from the prison cells beneath the Police Department. They laughed at her until she informed them that she still had the diamond, so they agreed. Killer Croc and Penguin made their way to the Police Department by way of the sewer. Once Catwoman was freed, she once again refused to hand over the diamond, until Killer Croc growled at her. Shortly after, Batman and Robin arrived, which caused Catwoman and Penguin to flee. Croc stayed behind to try and fend them off and allow Penguin and Catwoman to escape.

Penguin and Catwoman retreated to the City Zoo where they were planning on staging the final phase fo their plan. When Batman and Robin arrived at the zoo, Catwoman and Penguin rushed to the Arctic habitat of the zoo, where they were hoping to execute the last stage of their scheme. When Batman and Robin arrived, Penguin fought alongside Catwoman and the Freeze Girls, but was defeated and sent back to Arkham Asylum.

The Penguin is among the villains who raid the Man of the Year Award ceremony after The Joker steals Bruce Wayne's trophy. He steals a gold necklace from a woman and listens to The Joker acceptance speech with Harley Quinn, The Riddler, and Two-Face at Lex Luthor's table. When Batman and Robin arrived, he escapes through the theater with Joker, Riddler, and Two-Face before Batman and Robin defeat Harley. They then found him and fight him in the portable versions, and send him back to Arkham Asylum.

Later, when Lex Luthor was demonstrating his Kryptonite gun to The Joker, he aimed it at the wall of Penguin's cell at Arkham Asylum. The wall was destroyed and Penguin was revealed to be behind it in a bathtub with a fish. While Lex and Joker were talking, Penguin walked past them and jumped of the wall gliding on his umbrella to escape.

He is later seen during the prison break and tries to escape Batman and Robin on with Bane and Poison Ivy with the former's mole-machine.

Penguin hides at the Arctic World exhibit of the zoo (once again) in the hub, and is available for 500,000 studs after he is defeated.

He is also a playable character in the LEGO Gotham City bonus level.

The Penguin Minions also appear around Gotham City as basic enemies and on the first level on occasion.

In portable versions, Penguin's minikit can be found in the first level, Gotham Theatre. He costs 100,000 studs.

This is a description taken from LEGO.com. Please do not modify it. Oswald Cobblepot has three great obsessions: birds, umbrellas, and other people’s money. Dubbing himself “The Penguin”, this tuxedo-wearing troublemaker robs and steals to acquire the wealth he thinks he richly deserves!