“To survive, I must become someone else. Something green and pointy...and arrowey.”
―Green Arrow [src]

Green Arrow is a Super Heroes minifigure. He first appeared on portable versions of LEGO Batman 2: DC Super Heroes, but was later made physically available, although in extremely limited quantities, as a Comic-Con exclusive giveaway. 2015 saw his first set appearance in 76028 Darkseid Invasion. He will also appear in 70919 The Justice League Anniversary Party in 2018.

Green Arrow wears a tight, mostly green tunic. At the sides of the tunic, roughly around the muscular pattering, is a darker green section with diagonal, black lines to give the appearance of a ridged texture. Arrow has a strap with a golden latch at the end around his arm. At two points are light green lines with a gentle incline that emerge from each of the straps before taking a more drastic plunge and then finally returning to their original slant when they reach a seam in the center of the suit. The seam runs down the length of the torso to a golden belt-buckle, which is an oval with an arrow insertion, to his hips. There the tunic parts into two flaps which do not extend much further. The belt is black and of the same width as the straps. Two other straps emerge from the buckle and curve downward over Arrow's tunic until they reach the end of his leg. Beneath the tunic, Arrow has dark green trousers, knee-pads, and boots. His arms are bare and he wears earth green gloves.

An earth green hood is pulled over his double sided head, which has dark tan stubble and a smirk and on the other side a serious look. Over his eyes is an earth green mask with bright yellowish green eyes.

His 2015 variant saw him having bright yellow tousled hair. His face has a similar design but features a larger mask and a new double sided expressions: an angry expression with clenched teeth and a scowl. The earth green hood is now pulled back and hangs over his back, a piece previously used by Wyldstyle. His torso has a similar design but feature a zipper in place of the seam down the middle of the torso and is slightly pulled down to reveal the green undershirt, his belt is also thinker and less curved on his body. The hips are bright green with dark green legs, which now lack printing and as such the straps coming from the belt are missing. He feature the same back printing as the original, featuring the continuation of all the suits' designs continued from the front, but is mostly covered by a large trapezoid shaped quiver containing six light green arrows. His hands are also light green, and he comes with a light green compact bow. 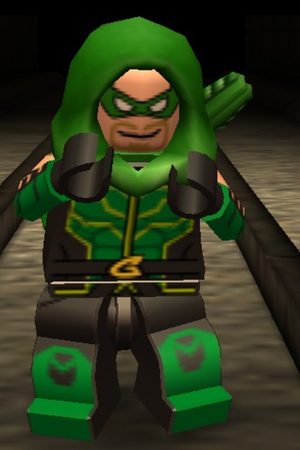 Green Arrow as he appears in LEGO Batman 2

Green Arrow has a green hood and mask. He has a smiling face with a light beard of stubble. His torso is black, but mostly covered in green patterns. His "suit" is tight enough to show the cut of his muscles and has a belt running above his waist with an ornamental "G" as the buckle. His arms are green, decorated with lines to depict archer's gloves. He has black legs with green boots. His hips are also black and decorated with a continuation of the lines dividing the black from green on his torso and a small continuation of the green itself in the center. He carries a bow and has a quiver mounted on his back.

Green Arrow is unlocked for purchase after finding the first minikit in the level 'Wayne Industries' and can then be purchased for 200,000 studs.[1] He is playable in the Justice League training missions after completing story mode.

He is armed with his bow and is able to use the grapple ability, acrobatics, charge his attacks to destroy silver objects, use stealth to avoid detection, and hit several targets concurrently.[1]

In LEGO Batman 3: Beyond Gotham, the Green Arrow is based on his 2015 physical appearance, and is voiced by Stephen Amell, who plays him in the television series, Arrow.[2] His Arrow version is available in an Arrow DLC pack. Portable versions of the game use a design based on Green Arrow's classic appearance resembling Robin Hood with a goatee and feathered cap.

Oliver Queen was the heir to Queen Industries and a vast fortune that came with it. However, at a young age his parents were killed. Ollie grew up into a disrespectful playboy. As an adult, he was assumed dead after an accident left him stranded on a deserted island. To survive, Ollie constructed a makeshift bow and used his natural affinity for archery to hunt and survive on the island. During his time there, he discovered a village which had been desolated by drug traffickers. Ollie was able to escape the island when the traffickers returned. He donned a disguise made from the island's fauna and grease from their ship. Using his bow, he managed to defeat them and return to the mainland, where they were handed over to the authorities.

From his time on the island and his experience with the traffickers, Ollie became hardened and developed strong political views. He took more of an interest in Queen Industries, using its state of the art technology to begin a career as the vigilante Green Arrow. His best known equipment is a collection of trick-arrows, which make use of a specialized gimmick to make them well suited for specific situations.

Green Arrow has been a core member of several iterations of the Justice League of America, often as the team's political conscious. Arrow's views have put him at odds with Hawkman, Batman, and Green Lantern, though he has been able to put aside his differences with Batman, for a working relationship, and developed a strong friendship with Hal Jordan. While in the Justice League, Arrow also met Black Canary, who he fell in love with.

Though he does not appear in the story, Green Arrow is a member of the Justice League and is playable in a few of their side-missions.[1]