Nightwing is a minifigure based on the DC Comics character of the same name, appearing both in the Batman theme and later in DC Comics Super Heroes. In DC canon, Dick Grayson was the first of several heroes called Robin who received tutoring from Batman. As an adult, Dick struck out to become a solo hero, Nightwing, to have his own adventures.

The first Nightwing minifigure was released in 2006. Since then, two other minifigures and a microfigure have been released. Nightwing has appeared in all three LEGO Batman video games as well as other DC-themed LEGO media. He is voiced by Josh Keaton in LEGO Batman 3: Beyond Gotham and Will Friedle in LEGO DC Comics Super Heroes: Justice League - Gotham City Breakout

The first Nightwing minifigure has a spiky black hairpiece reused from the Exo-Force theme. He wears a domino mask which flares upward at the nose and at the sides. His torso is black with his blue v-shaped wing logo printed on the chest. Dark blue and grey lines are used to give the sense of his suit's muscular cut against his body. His arms are coloured blue, continuing from his insignia, and his hands and legs are coloured black. He is armed with two transparent light blue escrima sticks. This design was later transferred to a microfigure.

Nightwing reappeared in 2014 with a minifigure based on his appearance in The New 52. The minifigure reflects newer design standards, including more detailed chest muscles and animated expressions: a grin and a scowl. The mask has also been updated with red lenses as well as a geometry which is overall more rounded and dynamic. The logo on his chest has been changed considerably. It is larger, red rather than blue, and makes more exaggerated cuts into the suit. A "head" has also been added to the wings which points upwards out of what was previously v-shaped. Light grey lines representing armour plating are also visible. The logo, muscles, and armour are all continued onto Nightwing's back. Nightwing's hairpiece has also been updated from the "anime-styled" Exo-Force piece to the less exaggerated Sleepyhead hair (Part:98385). 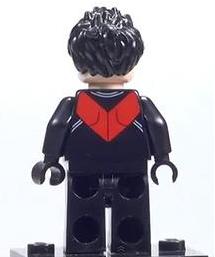 The New 52 variant was later redressed for a 2016 polybag with the more popular blue colourscheme. Though Nightwing also returned to a similar colourscheme in the comics around the time of the polybag's release, this minfigure still uses the shape of the logo and the armoured seams of The New 52 which differ separate it from any blue versions of Nightwing's costume that have "officially" existed. His lenses have reverted from red to white and the shade of blue used this time is dark azur (rather than the original version's bright blue). Nightwing's expressions have been changed from the grin and scowl of the last version to a smirk and grit teeth.

In LEGO Batman: The Videogame, Nightwing has his appearance from 7785 Arkham Asylum. He is armed with a pair of escrima sticks for melee battle and a batarang for ranged attacks. He is also able to use grappling hooks and walk on tightropes faster than most other characters (the exception being Ra's Al Ghul, who moves at the same speed). Nightwing's alter ego, Dick Grayson, is also playable on portable versions of the game.

He has no alternate appearances, but is able to use four super suits:

These are the same suits used by Robin. 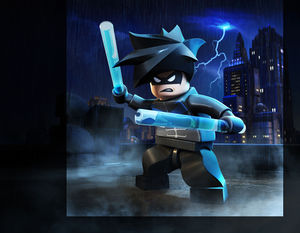 LEGO Batman 2: DC Super Heroes includes Nightwing as a character only on portable versions and as DLC for consoles. He features the same design as before, but is slightly updated with backprinting. Nightwing retains his escrima stick weapons as well as his batarang and grapple abilities. He is still able to use Robin's super suits, but transforms into Robin in the respective suit when he does. Portable versions of the game also give Nightwing the stealth ability.

LEGO Batman 3: Beyond Gotham uses the red New 52 design from 76011 Batman: Man-Bat Attack for Nightwing. Other figures based on the Dick Grayson character, Agent Grayson and Robin (1966) are also playable and discussed in their respective articles and each have their own abilities. As Nightwing, Dick again has his escrima sticks, which he is now able to throw, and a grapple gun. Acrobatic abilities such as double-jump and swinging on bars are added.

Whereas the previous two games only included Nightwing as a playable character, LEGO Batman 3 includes him in an end credits scene cameo (where a silhouette which seems to be teasing Spider-Man and the Avengers turns out to be Nightwing and various other DC heroes) and three side-quests:

The LEGO Dimensions version of Dick Grayson, following its source material in The LEGO Batman Movie, is able to "rip" costumes to switch between "Robin" and "Nightwing". This version of "Nightwing" is an alternate Batman costume briefly used by Dick in the movie and not a separate identity.

As a child, Dick Grayson was part of a circus act known as The Flying Graysons. One night, his parents were murdered during the act. Dick was then adopted by Bruce Wayne, the better known as Batman, who recruited Dick to become the first Robin. After years of serving as Robin and working with Batman and Batgirl, Dick grew tired of being overshadowed and chose to strike out on his own. Around this time, he formed the Teen Titans with other sidekicks and young heroes, such as Kid Flash, Wonder Girl, Cyborg, among others and fought villains such as Deathstroke. After talking with Superman, he learned of the Kryptonian legend of Nightwing, who was a vigilante shunned by his family. Dick adopted the name and retired his Robin mantle, which would be used by Jason Todd later.

He returned to Gotham for a time where he restarted his working relationships with Batman and Batgirl, though they became rocky since Bruce and Dick never made amends and Barbara was jealous of his short-lived relationship with Huntress. However, they eventually made amends, or reached at least mutual respect (as with Batman). Nightwing also worked with the new Robin, Tim Drake.

Nightwing has joined several incarnations of the Justice League and the Outsiders, as well as occasionally assisting the Birds of Prey and newer line-ups of Teen Titans.

This is a description taken from LEGO.com. Please do not modify it. (visit this item's product page) Nightwing

Gliding through the night sky, swiftly and silently, comes Nightwing. Once upon a time, he was known as Robin – Batman’s protégé and crime-fighting partner. But now he flies alone as Nightwing, protecting the good people of Gotham City as they sleep soundly in their beds.