Hawkman's physical appearance is based of off his design in The New 52. He has gold legs, green hips, and gold hands, as well as a flesh-toned torso, arms, and head. His legs, hip, and torso are printed to display his attire. His legs have green printing at the top to depict his pants, while his boots are gold. On his torso and above waist, he has a golden belt, part of which dips slightly into his hip element, where the printing is continued. On the rest of his torso, his printing depicts a harness, with four straps coming from each corner and joining at the center. Hawkman also has a golden winged helmet, which fits over his head, and golden wings. The golden wings are printed with his feathers, and can be switched out for another element, also gold and printed, which depicts his wings folded in. He carries a grey flail.

In LEGO Batman 2 Hawkman wears a costume based on his classic design. He wears a golden helmet with wings on the back, a small, beak-like nose, and large eyeholes which are coloured in white. He has golden wings on his back which seem to be the same mould used for the Flying Mummies from Pharaoh's Quest, but much more flexible. He has bare arms and a muscular torso with no clothing except for two yellow straps coming down from his shoulders and around his side with his symbol, a red circle with a black hawk inside. He has red hips, with a yellow stripe spanning nearly the whole front vertically. His legs are green, but with red tights and boots with a vertical, yellow stripe printed on. He has back printing of the backs of the yellow straps and lines to give his back more shape.

Hawkman carries a mace made from a brown rod and a grey gear. He is able to fly and has super strength.

In LEGO Batman 3, Hawkman uses his appearance from Darkseid Invasion, though he still has the Pharaoh's Quest styled wings and carries a mace. He retains his ability to fly, but no longer has super strength. He is able to throw his mace, however. 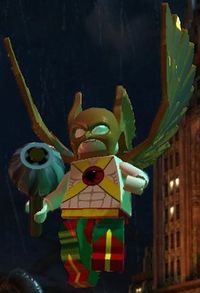 Hawkman has lived dozens of lives, beginning with the Egyptian prince Khufu Kha-Tarr. Khufu discovers a downed spacecraft while traveling through the desert. The pilot tells him that the ship is made of nth metal before she dies. It is brought to the temple of Horus where the Egyptians discover that it has the power to defy gravity and smelt it down to create weapons and equipment, such as wings that allow them to fly. However, Khufu after he and his lover Chay-Ara are murdered with a cursed nth metal dagger by a treacherous priest, they and their assassin are sent into an endless cycle of reincarnation with Khufu and Chay-Ara finding love in each other before they are killed again. Wielding nth metal moulded into archaic weapons and a pair of wings, the Hawkman mantle has been utilized by Khufu's two most recent reincarnations, an archaeologist named Carter Hall and alien Katar Hol, an escapee from the belligerent world Thanagar.

Hawkman often works with Chay-Ara's reincarnation, Hawkgirl, who is more rebellious towards the idea that they are trapped in a cycle of rebirth. He has been a member of both the Justice Society and Justice League, and is best friends with The Atom while harbouring a rivalry with Green Arrow.

Since the time stream has been tampered with by a battle between The Flash and Reverse-Flash, Hawkman has only ever been Katar Hol, though he uses Carter Hall as an alias, and there is no reincarnation cycle. He flees to Earth from Thanagar after his failed plan to end Thanagar's history of bloodshed leads to the deaths of their king and prince, all of the Thanagarians to lose their wings, and the remaining Nth metal to graft itself to Katar's body. Hawkman is recruited by Amanda Waller and Steve Trevor to become a member of the Justice League of America, in the event that the independent Justice League ever goes rogue, and is intended to counter Aquaman. After the JLA revolts against Waller and disbands, Hawkman is one of the members who reforms as a part of the Canadian based Justice League United.

Hawkman is Katar Hol, a member of the Justice League. He is captured by the Legion of Doom and locked in a giant birdcage in the sewer underneath the Hall of Justice while Lex Luthor disguises himself as Hawkman to infiltrate the Hall of Justice and sneak the other Legionnaires in so that they can use the slideways teleporter to lay siege to the Watchtower. After the threat of Brainiac becomes imminent, Hawkman is among the members that Martian Manhunter tries to contact for assistance, but Hawkman is unable to respond because he is still imprisoned. Even after Brainiac and the Legion of Doom are defeated, the League still does not realize that Hawkman is missing.