Martian Manhunter is a core member of the Justice League. A physical Minifigure was free with orders of 75 USD / 50 GBP or more on Shop@Home during March 2014, but sold out in the United States and Canada within eleven days due to immense order. Before that, however, Martian Manhunter appeared in LEGO Batman 2: DC Super Heroes and LEGO Batman: The Movie - DC Super Heroes Unite in a supporting role as the Justice League's coordinator. In both appearances, he is voiced by Cam Clarke, the same actor as Green Lantern. Martian Manhunter returns as a part of the story and a playable character in LEGO Batman 3: Beyond Gotham where his power set is expanded from the previous game. 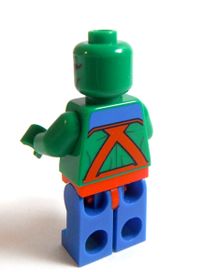 The promo figure's back

Martian Manhunter has green skin with a bald, beetle browed and sunken head with red eyes and a serious expression. He leaves most of his muscular chest exposed, though his blue cape does hang over the top part of his torso and his star emblem has a pair of straps which connect the cape to his red and black loin cloth. Under the cloth Manhunter wears blue trousers.

In 2015, he will be in his classic attire from LEGO Batman 3. His torso is bear except for a red belt with a circular pie-shaped emblem in the middle and red straps which stretch over his torso and ending with clamps on his shoulders which connect to a blue cape complete with a large collar. Manhunter's face is designed with more lines to accentuate the unique shape of his head and his eyes are red, but also have white pupils. His blue legs now feature no printing.

In both LEGO Batman 2 and LEGO Batman: The Movie, Martian Manhunter has large, red eyes with black pupils and a black area surrounding them to give his head depth. There is a dark green design on his head to give it shape. He wears a blue cape, and has diagonal, red straps going up his otherwise bare, green chest which meet at the cape and connect to it with a red circle that is black on the inside and is decorated with a red asterisk. Martian Manhunter's legs are blue and his hips are red.

His in game abilities include flight, Martian vision, super strength, and invincibility.

Martian Manhunter will return in LEGO Batman 3 with a new costume more inline with his classic appearance, though he wears blue pants instead of shorts. His torso is bear except for a red belt with a circular pie-shaped emblem in the middle and red straps which stretch over his torso and ending with clamps on his shoulders which connect to a blue cape complete with a large collar. Manhunter's face is designed with more lines to accentuate the unique shape of his head and his eyes are red, but also have white pupils. His abilities are mostly unknown, but it has been confirmed that he may transform into a big figure which, aside from the colossal size and bulging muscles standard of most big figures, resembles his natural Martian form.

J'onn J'onzz is a native of the planet Mars, which is home to two powerful races of Martians, green and white. While the White Martians who inhabit the icy poles are wild and barbaric, the Green Martians of the desert are peaceful and have developed an advanced, utopian society. J'onn is a Manhunter, Mars' equivalent of a policeman, and possesses all the abilities the other Martians do, including telepathy and shape shifting. After a plague called the Burning stries the Green Martians through their telepathic unity, J'onn is able to survive by cutting himself off from the other Martians, but finds the rest of his homeworld barren and deserted, believing himself to be the only one able to survive.

J'onn wandered through the desert lonely and mourning his wife and daughter until he is teleported to Earth by an artifact the White Martians had left behind when they invaded that planet millennia prior. J'onn takes the chance for a new life and after watching and studying earthling culture creates the identity of police detective John Jones. He secretly used his powers to solve mysteries, but other than the odd criminal and superhero team-up, few ever discover that he was a Martian in disguise.

After Superman begins operating publicly, J'onn admires how an alien is accepted as the Earth's protector and introduces himself to the world as J'onn J'onzz, Martian Manhunter. J'onn is a founding member of the Justice League and serves mostly consistently with the team when the roster is changed. He forms a rivalry with the alien telepath Despero who kills the parents of J'onn's protégée, Gypsy, and also targets her, though J'onn intervenes. Instead, Despero murders Leaguer Vibe and also attempts to kill the Blue Beetle, but Martian Manhunter traps him in a false reality where Despero believes he has defeated the League and destroyed the Earth. When Despero later escapes from his false vision, he is enraged and swears revenge on the League again.

Despite his devotion to the League, J'onn does have a few adventures as his own such as helping to broker peace on a surviving Martian colony on the rings of Saturn to bring the Red and White Saturnians together as his own people never had been.

J'onn's twin brother, Ma'alefa'ak, now going by the name Malefic, also resurfaces. Due to a prophecy foretold by their mother that Ma'alefa'ak would be a great evil, he was treated as an outcast in his childhood. After misusing his telepathic abilities on J'onn's wife, Ma'alefa'ak has his powers removed which pushes him even farther from his people, and, in addition to being tortured by Darkseid's underlings, he becomes insane. He engineers the plague which attacks the Green Martians' telepathy and believes himself to be the sole survivor, only to learn years later that J'onn had also escaped. Ma'alefa'ak leaves for Earth to finish the job. While impersonating his brother, Malefic kills and tortures various friends and allies of J'onn. When the League has no choice but to turn on Martian Manhunter, Malefic reveals himself to his brother as the true culprit. J'onn defeats his brother by restoring his telepathic abilities, and therefore his fear of fire as they head towards the sun on a White Martian vessel Malefic had been using as a base. Though J'onn has trained to cope with his phobia and is rescued by Superman and Orion via a Boom Tube, Malefic is not and is presumed dead when the ship catches fire. However, a small part of Malefic's consciousness survives in J'onn's mind and triest to influence his brother's decisions as it slowly attempts to take more control. 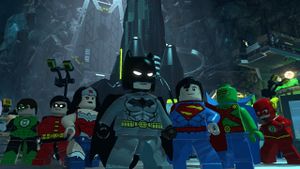 J'onn, several other Leaguers, and Robin collected in the Batcave

Martian Manhunter is later killed by Libra, a prophet of Darkseid, to fulfill the wish of a minor villain named the Human Flame who despises J'onn for defeating him years ago. J'onn's death causes a psychic shockwave to be sent out and his life story appears in dreams to Superman, Batman, Wonder Woman, Gypsy, and Black Canary. J'onn's body is buried on Mars and his funeral is attended by the various heroes he has worked with and mentored throughout the years.

J'onn's corpse is later sought out by a Black Lantern power ring which reanimates him as a zombie. Black Lantern J'onn returns to Earth to feed off of the emotions of the living, starting Green Lantern and The Flash who manage to escape him. J'onn is freed and truly returns to life when Green Lantern bonds with the embodiment of life itself, the Entity. Martian Manhunter briefly becomes a White Lantern. Since he has been resurrected, the Entity instructs J'onn to choose between continuing to protect his friends on Earth, or returning to Mars and recreating it. When J'onn rejects another surviving Martian, an insane female named D'kay D'razz who wishes to mate with J'onn, the Entity observes that he has chosen Earth.

When The Flash alters the timeline to destroy a dangerous alternate history, history is rewritten. In the new continuity, J'onn is no longer a founding member of the Justice League. He does join as the eighth member, but his tenure is disastrous and he leaves the League on questionable terms. He later founds the Justice League of America, a government sponsored team which is meant to counter the regular Justice League should they go rogue. J'onn is meant to be Superman's counter. When the opposing Leagues inevitably come into contact, the JLA decide that they do not like being the government's pawns and leave. However, the various members of the original league, the JLA, and the Justice League Dark end up coming into conflict again when they separate and regroup in new teams to discover the circumstances by which Superman has been manipulated into killing Doctor Light. They learn that they are all being played by the Crime Syndicate and Secret Society of Super Villains, but too late as they are imprisoned in the Firestorm matrix and the world is overrun by the Syndacite and their super villain henchmen. J'onn is able to use his telepathy to contact Steve Trevor, who arrives with Batman, Cyborg, and Killer Frost to rescue the Leaguers.

The Justice League of America officially disbands, but J'onn and some of his former teammates soon join the Justice League United, a Canadian superhero team, with Adam and Alanna Strange, Animal Man, Equinox, Green Arrow, Hawkman, Stargirl, and Supergirl.

Martian Manhunter was a member of the Justice League who monitored the other members from the Watchtower. He did not participate directly in the final battle with Lex Luthor and The Joker, but dispatched Wonder Woman, Green Lantern, The Flash, and Cyborg to assist Batman, Robin, and Superman. When Lex unveiled a mech and seemed to have the upper hand, J'onn fired the Watchtower's cannon to destroy it.

J'onn later must be rescued by his teammates when the Watchtower is attacked by the Legion of Doom. Afterwards, the League learns that Brainiac is using the power of the Green Lantern Corps to shrink earthling cities. J'onn and the rest of the Justice League head out into space to collect power rings from the other Lantern Corps to defeat Brainiac.

This is a description taken from LEGO.com. Please do not modify it. (see an archive of the product's page) Collect the heroic shape-shifting alien from Mars!

Build up your LEGO® DC Comics Super Heroes Justice League with J’onn J’onzz, the shape-shifting Martian Manhunter. A friend and ally of Superman™, Batman™ and Wonder Woman™, this alien hero has a variety of superpowers including flight, super-strength, telepathy and invisibility.