Unikitty is a character from The LEGO Movie voiced by Alison Brie. She appears in several sets accompanying the movie as brick-built figure with a unique variation in every set she appears in, including Biznis, Astro, Angry, Queasy, and a collection of unique expressions. Unikitty will star in her own animated series Unikitty! which will introduce her brother Puppycorn and other friends. Tara Strong will take over voice duties.

Unikitty is a brick-built figure. She has a 1x3 arch as her main body, with two 1x1 plates attached to the bottom of each end. These plates represent her lower legs and feet. Her head is composed of two 1x3 plates separated by a 1x3 brick, with printing on the brick depicting her face. On top of her head, on each side, are two inward-sloping cheese slopes depicting her ears, and in the centre of her head, she has a unicorn horn, attached to the head with a 1x1 stud with a hole in the centre. A regular 1x1 stud is used to attach the head to the body. At the back of her body, she has a puffy tail, represented using a new element. The colour and printing of all of the above parts varies from variant to variant.

Her main variant features a light pink body, and the 1x1 plates are White and aqua in the front and white and cool yellow in the back. Her neck is spring yellowish green. Uni-Kitty's head has a white bottom 1x3 plate, a light pink 1x3 brick, and a light pink top 1x3 plate. Her ears are bright pink, her horn is light royal blue, and her head is printed to depict a large, smiling face, with large blue eyes, a nose, and a mouth. The horn is connected to the head using a white 1x1 stud with a hole in the centre. Her tail piece is white and medium blue. Her Biznis Kitty variant is the same as her main variant, except her body has dollar, cent, Euro, and percent symbols and a necktie drawn on, and she also features glasses drawn onto her face.

Unikitty's Astro Kitty variant features a blue body, and the top 1x1 plates for each leg are blue, while the bottom ones for each leg are warm gold. Her body also features the classic space logo in the back corner. Her neck is blue, as are all the pieces composing her head and her ears. Her horn is warm gold, and connected to her head with a white 1x1 stud with a hole in the middle. Her head is printed to depict the opening of a space uniform helmet, and her face once again features a large, smiling face, with large blue eyes, a nose, and a mouth. Her tail piece is all blue. 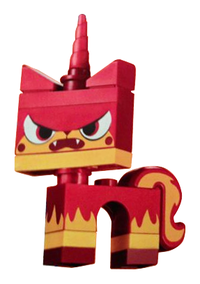 Unikitty's Angry Kitty variant features a red body, and the top 1x1 plates are yellow, while the bottom plates are dark red. The torso is printed at the bottom, on each leg, depicting flames. Her neck is bright red as well. Her head has a bright yellow bottom 1x3 plate, a bright red 1x3 brick, a bright red top 1x3 plate, bright red ears, and a bright red horn. The horn is connected to the head with a dark red 1x1 stud with a hole in the centre. Unikitty's head is printed to depict a large, angry face, with narrowed red eyes, an angled nose, and an open mouth with two small sharp teeth. Her tail piece is bright red and printed with orange flames. A new Angry Kitty variant, to be introduced in 2015, will feature a different face. On this face, the eyes are closed and her mouth takes up most of her face, the mouth being widely open. Her mouth in this variant also reveals eight large white teeth.

The exclusive "Cutesykitty"/"Cheerykitty" variant of Unikitty given away at the 2014 San Diego Comic Con is nearly identical to her main variant, with the exception of the 1x3 bricks on which her facial features are printed. Two interchangeable bricks are included in this variant, allowing her to alternate her facial expressions. The printing on the "Cutesykitty" brick depicts a "cute" expression with two glimmering blue eyes, out-and-downward slanted eyebrows, and a gaping mouth, while the printing on the "Cheerykitty" brick depicts an excited expression with closed eyes and a wide-open smile.

Another variation released in 2015 features Unikitty in a crouching position with interchangeable wide-eyed and teary expressions. The wide-eyed expression features an upturned right eyebrow, a downturned left eyebrow, wide eyes, and a small mouth. The teary expression features an upturned left eyebrow, a downturned right eyebrow, sagging lower eyelids, watery eyes, and a closed quivering mouth. The crouching position will be achieved primarily through a sloped 1x2 pink brick, and the tail will be attached where it is attached at the side of the body as opposed to the top, allowing it to rest parallel to the ground as opposed to upright and curl around Unikitty. Below the 1x2 sloped pink brick are plates representing her hooves, which follow the same colourscheme and order as her main variant. While the body is a significantly different build than in Unikitty's other variants, the head uses the same parts, with different printings for the two facial expressions. This variant appears in 70818 Double-Decker Couch.

The version of Unikitty released in her LEGO Dimensions fun pack has the same body as her more regular pink versions. Her mouth is shut and her eyes are large and shining. Her eyebrows are printed on the plate above her face with another unique placement. This time both of them are arched over her eyes.

Unikitty is a playable character who can interact with rainbow bricks, double jump, and transform into Angry Kitty. She is unlocked for play after completing the level "Welcome to Cloud Cuckoo Land," and is also playable in "Attack on Cloud Cuckoo Land," "Infiltrate The Octan Tower," and "Broadcast News." The Astro Kitty and Biznis Kitty variations are also unlockable in the game, and Queasy Kitty can is also playable via an access code included with 70810 MetalBeard's Sea Cow.

Unikitty is playable in LEGO Dimensions via the toy tag included in her fun pack. She is able to destroy rainbow LEGO bricks and can transform into Super Angry Kitty.

Unikitty is the princess of Cloud Cuckoo Land, and first greets Emmet, Batman, Wyldstyle, and Vitruvius when they arrive. Unikitty describes how Cloud Cuckoo Land has no rules to limit creativity, with the only limitation being that the ideas must be happy. Unikitty also demonstrates that she attempts to be constantly positive herself.

Unikitty joins the other Master Builders' assembly in "the dog" and escapes with Emmet, Batman, Wyldstyle, Vitruvius, and Benny after Bad Cop attacks her home. As part of their escape plan, the group builds a submarine, though because of their different building styles (Unikitty, for example, builds in a cutesy and colourful style) and unwillingness to cooperate, the sub is poorly made. Regardless, the group escapes Bad Cop, though Cloud Cuckoo Land is destroyed, something that greatly saddens Unikitty.

Because of the poor quality of the sub, it breaks apart, and the group hides in Emmet's Double-Decker Couch in order to hide from the Robo SWATs and Bad Cop. They are picked up by Metalbeard in his Sea Cow, and while on board, Emmet hatches a plan to infiltrate Lord Business's office.

Unikitty, Emmet, Vitruvius and others stand atop the Sea Cow after escaping Cloud Cuckoo Land

As part of the plan, Unikitty infiltrates a meeting held by Lord Business, with Unikitty disguised as Biznis Kitty and Batman using his Bruce Wayne alias. Bruce convinces Lord Business to add speakers to his Kragle (allowing Emmet and WyldStyle to sneak in disguised as construction robots), and then leaves Unikitty to distract the Executrons, wanting to assist Emmet and WyldStyle as Batman. Soon, however, all members are caught, and put in Lord Business's Think Tank, which is set to self-destruct as he glues together the world with the Kragle.

After Emmet sacrifices himself to stop the destruction of the office tower, Unikitty joins the group as they give an inspirational message to the ordinary citizens under attack, journey to BricksBurg with Benny's Spaceship, and fight the Micro Managers. When Emmet returns and his Construction Mech is attacked by Micro-Managers, Unikitty, in her anguish at seeing Emmet in trouble, is finally unable to suppress her "not happy thoughts" and becomes Angry Kitty, gaining an extraordinary amount of power and eliminating the Micro Managers so that Emmet can reach Lord Business. After Lord Business is persuaded to destroy the Kragle, Unikitty regroups with the rest of the protagonists to join in the celebration.

This is a description taken from LEGO.com. Please do not modify it. (visit this item's product page) Hailing from Cloud Cuckoo Land, the capital of rainbows and puppies, she is half unicorn, half animé kitten and one endless dance party. She is happy to join her fellow LEGO Master Builders in the quest to defeat Lord Business, but she also has a powerful secret.

This is a description taken from LEGO.com. Please do not modify it. Hailing from Cloud Cuckoo Land, the capital of rainbows and puppies, she is half unicorn, half animé kitten and one endless dance party. She is happy to join her fellow LEGO Master Builders in the quest to defeat Lord Business, but she also has a powerful secret.