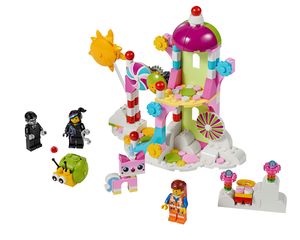 The Palace, catapult and five characters included in the set.

This set is made up of four main models- the snail, the flower catapult, the Uni-Kitty and the Cloud Cuckoo Palace itself.

The snail is composed primarily of lime green, yellow and green pieces. The two sides of its shell are attached to the body by a yellow rod, and it also uses antenna and white printed eye pieces.

The second mondel, the flower catapult makes use of white pieces to give a cloud-like appearance to the base, and makes use of a grey Technic pin so that the catapult can be fired. The two flowers are each made up of all transparent pieces- green and bright orange studs for stems, a violet flower piece for the flower iself, and a light blue stud for the centre. The flowers are mounted onto the catapult by fitting the stem through a yellow ring piece, and fired by pressing down on the front of the mechanism which is covered by light purple and white flat studs.

The Uni-Kitty is made up of fourteen pieces, and is mainly light purple in colour. Its face is printed on, as is the blue design on the tail piece which has been created specifically for The LEGO Movie sets. On top of her head, the Uni-Kitty has a light blue unicorn horn.

The Cloud Cuckoo Palace has a a white cloud-shaped base, with the tower itself being mainly lime green, purple, azure and light purple in colour with a light yellow base for the first-storey ceiling/second-storey floor. All throughout the Palace, light purple, white, yellow, lime green and transparent yellow circular plates (both 1 x 1 and 2 x 2 in size) are placed on the floor, and red balls are present on top of white pieces at various points. Coming out of the walls are two yellow and two azure flowers, and three circular pieces (two of which are printed, the other with a yellow-orange star attached to the centre of it). These circular pieces can be turned around, and the two positioned on the left of the building are linked by a system of three gears, so that when one turns, the other does as well. Finally, a yellow and yellow-orange sun extends out from the far left of the structure, which is attached by a transparent beam.

The set comes with three minifigures- Executron who comes with a pair of grey handcuffs, Emmet with a two-sided head (one happy expression, one worried), The Piece of Resistance on his back and a transparent red tracking device attached to the back of his right leg, and Wyldstyle also with a two-sided head (one side with an angry pression, the other smiling) and a folded-down hood.

The Cloud Cuckoo Land was the happiest place in the universe. Emmet and Wyldstyle once visited this place, but Emmet was being tracked by Executron, a henchman of Lord Business. However, a flower catapult by the Palace was used to fend off the robot.

This is a description taken from LEGO.com. Please do not modify it. (visit this item's product page) Protect Emmet and Wyldstyle in the colorful Cloud Cuckoo Palace!

Revel with Unikitty in Cloud Cuckoo Land, the happiest, most positive and creative place in the universe! Join Emmet, Wyldstyle and all the master builders in this multi-colored playful paradise where the sun is always shining and a cute snail glides between the bright flowers. But beware! Unbeknown to Emmet, there’s a tracking device on his leg and Lord Business’ Executron has trailed him to the palace and is ready to handcuff him. Shoot flowers from the flower catapult to fend him off and help Emmet and Wyldstyle make a getaway! Includes 3 minifigures and accessories: Emmet, Wyldstyle and Executron, and 2 figures: Unikitty and a snail.