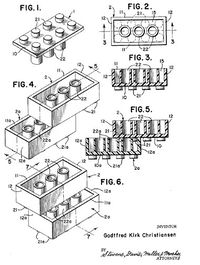 A Brick is a general term for any LEGO part. However, technically it is an element three plates or more thick, rectangular in shape, with at least one stud on top. LEGO studs are tiny round dots on a brick that can peg into other bricks to make them stack or connect. The bricks sometimes have stickers or printings on them, like many other LEGO elements. They come in many sizes, from a tiny 1x1 brick to the largest 12 x 24 brick plates. The original brick did not have the "Sockets" that the present-day brick had. They were just a tub on the inside. This made it hard to stack them and LEGO corp realized people were getting angry about that and added the sockets.

Bricks are referred to by their dimensions. When they are only three plates high, they can be referred to as a 2x2 brick. If they are taller, then a third number is added, referring to their height. An example is the 1x2x5 brick, which is a relatively rare brick only used in certain sets.

The only odd-number bricks are the 1x and 3x sizes. All sizes above are even numbers.

The first brick only one stud wide (as opposed to two) was the 1x2 brick introduced in 1953.

These are the oldest bricks.

Known in other circles as beams, these bricks have hollow studs and have holes through them for pins. The holes have a diameter of 4.8 mm.