487 Space Cruiser is a Classic Space set released in 1979. It contains a spacecraft, a small forklift and two Classic Space astronauts (red and white).

This set was only available in the US, where it was sold instead of the identical set 924 Transporter that was released elsewhere. Both spacecraft had the number "LL 924" printed onto their hulls though.

The spaceship was similar in colour and design to the smaller 918 Space Transport and the bigger 928 Galaxy Explorer.

The cockpit had enough room for two minifigures and could be accessed by tilting back its roof. At the aft the ship had a small cargo compartment where a small white container could be stored. The rocket engines and the aft fuselage had to be tilted to the sides to access it. 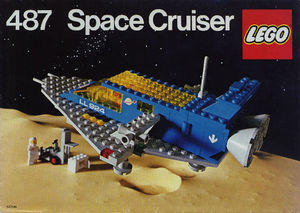