The Bohrok Va are small scouts and messengers for the Bohrok swarms. Each of the Bohrok Va carried small weapons, and could hurl extra Krana when their left arm was pushed down. In the BIONICLE universe, unlike the Bohrok, they are not controlled by the Krana; they are completely robotic, although they still obey the Bahrag.

Also released were four Kabaya promotional Bohrok Va in 2003, in the same appearance as the six original ones:

The six Bohrok Va could be combined to two combiners:

The Tahnok Va are fast, reckless, and fiery, and generally fight with the aid of their glowing Firestaffs. They often inhabit the Mangai network of caves, and generally cause havoc in Ta-Koro underground. 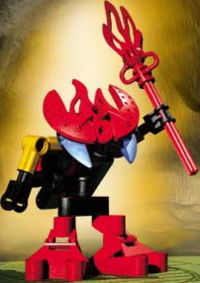 Once the Ta-Matoran learned that they weren't actually living creatures, they used lava to melt them.

Gahlok Va move quite slowly, however, they never stop, so they usually reach their destinations quickly. They move in a slinking manner, and are ideal for cutting through water with the greatest of ease. Despite their apparent slowness, they are also great climbers, due to their climbing hook weapons.

Lehvak Va are surprisingly loud and aggressive, despite their small size. They are accomplished climbers and swimmers, making them expert at navigating swamps, but htye are far from stealthy, as they are constantly whooping, and making as much noise as possible. they would seem overly confident, but they are never far from the Lehvak swarm, so their confidence is far from misplaced. Lehvak Va use their small katanas to cut through dense jungle growth as they scout.

Pahrak Va are quite strong, and are usually very slow, although, if motivated, they can move quite fast. Their only jobs are running scouting missions and keeping communications in order over vast areas, as well as keeping the Pahrak swarm together. They Pahrak Va carry large stone hammers, which they use for both offense and defense.

Nuhvok Va are, unlike their larger masters, not adept at heavy digging, although they can burrow if pressed. They do not normally confront matoran either, and are usually spotted lorking in shadows. They move quickly scampering from concealment to concealment, and sometimes pausing to listen. They are capable of seing in the dark, and can squeeze through minuscule gaps in the stone. They also carry claws, for defensive and burrowing purposes.

Kohrak Va are tall for Va, and are adept at sliding down glaciers, and climbing back up them by means of their ice claws. They are adept at the art of camouflage, and have excellent hearing. However, they are not fighters, and, at the slightest sign of an attack, they bury themselves in the snow until Kohrok arrive to help them.