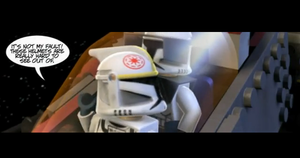 Clones are famous all across the galaxy.... is the sixteenth in a series of animated online comics depicting stories from the Clone Wars universe.

The clones attack shuttle gets shot down and crashes on a snowy planet. They manage to fix the walker and head up the hill.

The squad gets tired after climbing over the third hill. 1137 notices that 1139 is missing. Just then Blasty spots a sepratist shuttle with Nute Gunray in it. After getting informed that that they have R2-D2, Gunray is informed that there are some people that want to see him. When he comes out he gets attacked by the pilot and the commander. After that, 1137 finds 1139 on a tauntaun. The clones get in their newly hijacked Separatist shuttle. When they leave the planet, the commander notices that 1139 brought that tauntaun with him and shouts at him. The comic ends with to "to be continued..."