6154 Cinderella's Castle is a DUPLO Disney Princess set released in 2012. It contains 77 pieces, making it the largest set in the theme. The DUPLO Figures Cinderella and Prince Charming are also included.

Though several ways to build the set have been advertised, the model normally featured is also the largest. It includes a two-story high, pink castle with a grand entrance, a sitting room, a bedroom, balconies, a clock-tower, and turrets.

The entrance is built on half of a lilac oval plate. It has golden double-doors that create an arc at the top. They are hinged to pink pillars with a lighter pink arch over them. The arch is embroidered with a golden "C" inside a shield as well as flowers and leaves stemming off of a golden branch on each side. The purple roof does not entirely cover the arch, but only slopes inwards on the sides and has a turret in the center. The gate is loose from the rest of the castle and not connected in any way. 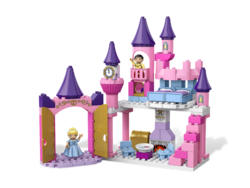 The interior of the castle is built on a white floor. It has no walls, but is supported by two pink pillars to the left, a staircase that curves halfway up coloured with two shades of pink and the decor in the center of the back of the room. The fireplace is the first part of the decor. It is a white brick decorated with yellow, orange and red flames inside of a grey stove decorated with a heart and pillars. Dirctly above the fireplace brick, two lilac pieces slope at an upwards angle, creating a chimney that extends up one standard DUPLO brick high before it connects to the two taller, white pieces. These pieces are decorated with printing of a crystal chandelier that creates a pillar between the two stories. To the left side of the fireplace is a golden chest and to the front is a table with a plate and two chairs.

Directly in front of where the stairs meet the floor on the second-story is a short, pink tower with a yellow window, blue curtains and a purple turret. To the left are two blue beds with white covers which extrude over the standard floor and are supported by a semi-circle extension. Behind the bed is a raised, angular, pink balcony with battlements. A pink tower protruding the right is built off of it, which in turn has another yellow window with blue curtains and purple roofing. To the left of the bed is the start of a tower with a circular, golden mirror in the centre. Above it is a rounded tower with an arch built in to allow access to a balcony. It again has a purple turret. A final tower is built in front of the one just mentioned. It is thin and round but becomes wider before revealing a white clock about to strike twelve that once again has a purple roof.

The set includes two Duplo figures- Cinderella has white, unprinted legs. She has a light blue torso printed with a swirling, silver pattern. Her arms have short, light blue sleeves, and are light nougat in colour. Her nougat head has large blue eyes with blue eye shadow, and a small mouth with pink lipstick. She has blonde hair held back with a light blue hairband.

Prince Charming has unprinted, red legs. His light yellow torso has golden epaulets and ribbons printed on it. He has long light yellow sleeves, and light nougat hands. His head is light nougat as well, and features large brown eyes, and a smiling expression. He has black hair.

The first one is a small, pink castle wall with a window and purple turret. It is separated from another, thinner tower with a smaller turret by a lowly raised chandelier. A table with a dish and a blue chair on either side is placed in front of it.

Another model is a bedroom. A fireplace with a purple turret over it for decoration sits behind a blue bed. It is connected to short tower with a smaller purple turret by a short, pink wall. To the right of the fireplace is a golden chest with Cinderella's skirt in it. To the left of the bed is a purple brick with a golden, round mirror on it.

The third is a pink arch with golden embroidery and two seats under it with a clock behind them.

A clock tower made from a support of three bricks of different shades of pink and purple before reaching the clock and the turret above is the fourth model.

The sixth and final is another short tower with a yellow window, blue shades, and a turret. The mirror is placed next to it and raised by a brick. The chest and a chair are placed loosely to the side.

The castle is LEGO's depiction of the one Cinderella and Prince Charming lived in after being married.

This is a description taken from LEGO.com. Please do not modify it. (visit this item's product page) Build the castle where Cinderella and Prince Charming will live happily ever after!

Cinderella and her Prince Charming are enjoying life in their big castle. This castle has 2 stories, big doors, tall towers, a fireplace, chandeliers, staircase, cute beds and much more. Build them everything they need to live happily ever after. Includes Cinderella and Prince Charming LEGO® DUPLO® figures.