6278 Enchanted Island is an Islanders set released in 1994. It contains a part of a tropical island with several structures and a large statue, a small sailing boat of the pirates, an outrigger canoe and seven minifigures, including two pirates and five islanders.

The Enchanted Island includes a two ships. One of them is an Islanders sailboat. It consists of a Red Canoe with a small mast and sail. The sail has King Kahuka's face on it. The other ship is a pirate ship. It is a small rowboat with a small mast, two sails, and a flag with the skull and crossbones on it. It carries two Pirates and two paddles. There is also a crocodile with a stand on it's back where King Kahuka rides it.

The Island itself is made up of two baseplates. One is a flat baseplate with a river printing, the other is a canyon-style raised baseplate. There is a small treasure chest in the canyon area in between the walls of the above area. Some foliage hides it but can be lifted to reveal the treasure chest. At the end of the area is a platform, with a ladder leading up to it. On top of the platform is a tribal drum and a flag. On that level, there is a seat with a cup and some walls, one of them a diagonal wall with a unique vine pattern. On top of those walls is another is a lookout area. It has windows, torches for illumination and a "porchlike" extension in front. For a roof it has some leaves. The whole area is covered in vines and leaves.

The second baseplate area is built upon a flat surface. 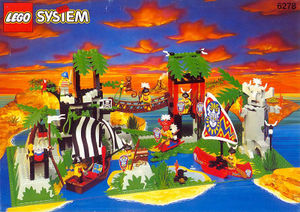 In the middle there is a small wood fire with something cooking on it. In one corner is a bush with a spear that has a "shrunken head" on it. There is a building with a plain first floor and a second floor that uses a lot of red bricks. Outside that building in the front (on it's second floor) are three spears attached to the wall and one of them has a shield with King Kahuka's face on it. There is also a ladder to the roof. The roof is built from leaves. A bridge goes from the second floor of the building, to the building on the other baseplate. If a pin is pulled, the bridge flips over. There is also a statue which is as tall as the building's second floor. The back of the body section opens. It is similar to a jail wall. It's arms are small and it's head can rotate. It's head is meant to look similar to King Kahuka's mask. Fire is held in both hands of the statue.

Only the Islanders know what dangers lurk in their remote tropical habitat. What will the Pirates find in this bizarre land? With building sets from the LEGO SYSTEM? Pirate collection, only you, the LEGO MANIAC?, can help discover this strange new world. 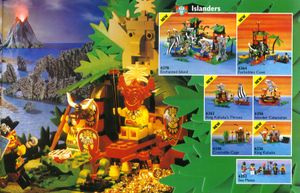 The set comes with two pirates. One of these pirates is Captain Ironhook. He has a silver hook hand and a brown peg leg. His shirt is torn and has a belt with a dagger in it. On his face is printed a beard and an eyepatch covering one eye. He also comes with a pirate hat with a skull and crossbones on it.

The other pirate wears a bandana and a striped shirt. He has a mustache and stubble printed on his head piece. His torso is a red and white horizontal pattern with a belt buckle printed on it.

Only the Islanders know what dangers lurk in their remote tropical habitat. What will the Pirates find in this bizarre land? With building sets from the LEGO SYSTEM? Pirate collection, only you, the LEGO MANIAC?, can help discover this strange new world.