8762 Toa Iruni is a BIONICLE set released in 2005. It is one of the two Toa Hagah released and was sold with the other, 8763 Toa Norik. He comes with a spear and a shield with a Rhotuka spinner in its launcher and another one in a special compartment.

Very little is known of Iruini's life before his recruitment into the Toa Hagah. What has been confirmed, however, was that he was active as a Toa for quite some time beforehand, operating as a member of another Toa team. When the Brotherhood of Makuta decided that Makuta Teridax needed Toa bodyguards, Iruini was selected as representative Toa of Air. He was endowed with metallic armor to indicate his status as an elite Toa and his former teammates presented him with his current Kanohi Kualsi as a badge of honor.

Iruini's new Toa team performed this task well and protected Teridax from things like Rahi intrusions. However, Iruini eventually quit the team, believing they wasted time on large threats (e.g. Hoto bug invasion) and not enough time on ever-present dangers. The group's victories caused them to be overconfident, especially their leader, Norik. This overconfidence lead to four of the Hagah being tracked down by Roodaka and mutated into Rahaga. They later found out that the Brotherhood was harming the Matoran they had sworn to protect, and they attacked the Brotherhood's armies of Exo-Toa, Visorak, and Fohrok. Iruini later temporarily allied himself with Toa Norik, managing to severely weaken Makuta and save their mutated friends. The rescue of their friends came at a great price, however, as Iruini and Norik were mutated into Rahaga in the process by Roodaka's mutation Rhotuka. 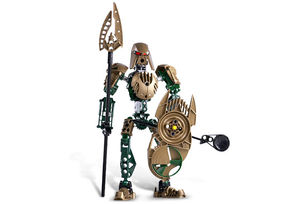 Iruini was at first ashamed of his appearance as a Rahaga, but over most of two centuries he had gotten somewhat used to it. Iruini did not believe in Keetongu, and felt that the Rahi was just a myth, until the Rahaga and the Toa Hordika found the legendary Rahi in Ko-Metru. After the Battle of Metru Nui, Iruini assisted the other Rahaga and Turaga Dume in rebuilding the great city.

He was with the other five Rahaga and Keetongu, helping other islands that have fallen victim to the Visorak, but they still used Metru Nui as their "base". Recently, the Rahaga went to aid the land of Xia, which was being ravaged by the ongoing battle of two monstrous Rahi - even though Xia is the homeland of their archenemy Roodaka. They arrived to find Roodaka in the custody of their allies, the Toa Nuva, and the Nuva forced her to turn the Rahaga back into the Toa Hagah.

After they were transformed back into Toa Hagah, Iruini made sure that the Kanohi Dragon didn't fall victim to The Mountain after the other Hagah had subdued the creature.

Upon hearing Gaaki's prediction of a coming threat, Iruini was slightly annoyed by its vagueness. After Kualus sent a smoke hawk to check, Iruini climbed up to a spire and saw hundreds of ships approaching. Iruini rashly ignored Norik's warning and used his Kualsi to teleport to one of the ships and wound up facing The Shadowed One, surrounded by Dark Hunters. After The Shadowed One revealed he was there to destroy the rest of the island, Iruini raised his weapon only to have the Dark Hunters raise theirs in response.

Iruini was saved by the timely arrival of Toa Helryx, who threatened the entire armada with a massive tidal wave. She had the other Toa Hagah teleported to the ship, and, after making clear to The Shadowed One that Xia was not to be destroyed, introduced herself to the Toa as the leader of the Order of Mata Nui. She informed them they had been recruited into their war against the Brotherhood, to which they protested to some extent. After revealing they were to track down Teridax with Zaktan as their guide, the Toa Hagah reluctantly agreed as Gaaki chillingly prophesied that one of their party would not return from the journey. He and the other Toa then teleported to Metru Nui where Norik told the Toa Mahri that they must destroy the Coliseum. The Toa Mahri doubted their story, and Iruini was attacked by Hewkii, though his skills proved superior to those of the Toa of Stone. The fight ended when Kualus used his Mask of Rahi Control to summon a giant Rahi, and Iruini combined his powers with Kongu, Norik and Jaller to stop the beast. After that, he watched Zaktan until the rest of the Toa could make a tunnel under the Coliseum. He then went in the tunnel with the rest of the Toa Hagah.

As a Toa of Air, Iruini can create, control, and absorb air. This also gives him the ability to control air pressure, create twisters, and summon wind storms. These abilities were lost when he was turned into a Rahaga, but he has since regained his powers.

As a Toa Hagah, Iruini carries the Cyclone Spear. He also carries a Rhotuka Launching Shield, which can launch healing spinners. These spinners can heal any wounds they touch. He wears the Great Kanohi Kualsi, the Great Mask of Quick-Travel. The mask actually allowed the user to teleport but only to a place within his or her line of sight.

As a Rahaga, Iruini carried a staff that could be used to hypnotize Rahi. His snag spinner could tangle the legs of creatures, cutting off their escape.

This is a description taken from LEGO.com. Please do not modify it. (see an archive of the product's page) Power from the past!

Long before the coming of the Toa Metru, Toa Iruini fought evil in a strange land. Equipped with his Mask of Quick Travel, cyclone spear, healing spinner and golden armor, this Toa of Air was ready to challenge any enemy. Relive ancient victories with this exciting set!