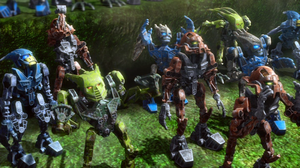 A group of Agori in BIONICLE: The Legend Reborn

Agori are the small BIONICLE sets from Winter 2009. They fought in the Core War with Glatorian for their respective Element Lords at Spherus Magna, but ended up on Bara Magna after its shattering. To prevent war, an arena system was created where Glatorian fought over resources. In some arena battles the Agori fought alongside the Glatorian as shields.

Set-wise, they are closely related to Av-Matoran, as they both have the same basic design. In the story, the anatomy of the Agori influenced the design of the Matoran created by the Great Beings. They live in tribes, but during certain events all joined to form a Mega-Village. After Mata Nui returned with the power source for the Prototype Robot, he asked Raanu to help the villagers evacuate.