The LEGO Group purchased all of the residual rights to the Kiddicraft block in 1981.

The first Automatic Binding Brick sets were known as Gaveæske (Gift Sets). In 1949 at least three different sets were released: 700/1, 700/2, and 700/3 (listed in descending size). They had cardboard inserts in the bottom half of the box and enough space above to allow a single level of bricks. These #700/x sets had the bricks layed out in the box and displayed in a zigzag or checkerboard pattern in 4 or 5 different brick colours Red, White, Yellow, Light Green and as the sometimes 5th colour, Medium Blue. Because the early bricks had slots on 2 sides of the brick, it was easy to put a picture or postcard into the slots, and make a picture frame. Automatic Binding Brick sets came with several postcard type colourful pictures for this purpose. These colourful pictures were discontinued by 1953. Automatic Binding Brick box tops show an example of bricks used as a picture frame with one of these colourful postcards.

The first LEGO bricks manufactured by the LEGO Group were the 2x2 and 2x4 slotted bricks for the Automatic Binding Bricks sets of 1949. They were available in all the sets of 1949, and only sold in Denmark. These bricks had no "LEGO" text embossed anywhere on the brick. These first LEGO bricks were available in Red, White, Yellow, Light Green, and Medium Blue. Windows and Doors with wings that slotted into the slots in the ends of the bricks, were also introduced in 1949 with the first bricks. These windows were available in 3 sizes: 1x4x2, 1x2x3, and 1x2x2. The 1x2x4 door type introduced that year did not have a window. There was a new series of LEGO windows and a door released in 1954 with glass panes. These windows came in sizes 1x6x4 (panorama), 1x6x3 (3 pane), 1x6x3 (shuttered), 1x4x3 and 1x3x3, and the door came in size 1x2x4. 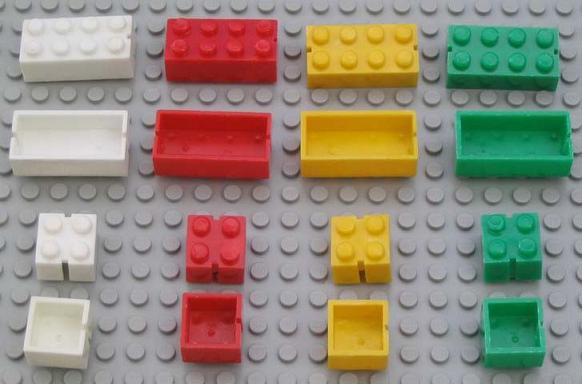 LEGO parts were also sold by Danish LEGO retailers as individual parts. These individual parts were sold from colourfully painted wooden boxes that the Danish LEGO retailers had to purchase from The LEGO Company Group. This way of selling LEGO parts would continue until the late 1960's, and many of the HO 1:87 Vehicles for the Town Plan line would also be sold this way.

The Automatic Binding Bricks eventually evolved into the LEGO Mursten in 1953. The slotted bricks were in production until 1957.

The Automatic Binding Brick boxes of 1949-52 all had this same box top design. These were sold only in Denmark, and briefly in southern Sweden. 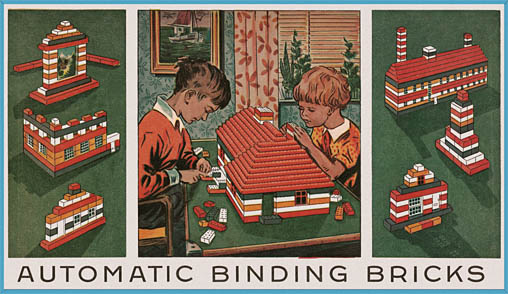 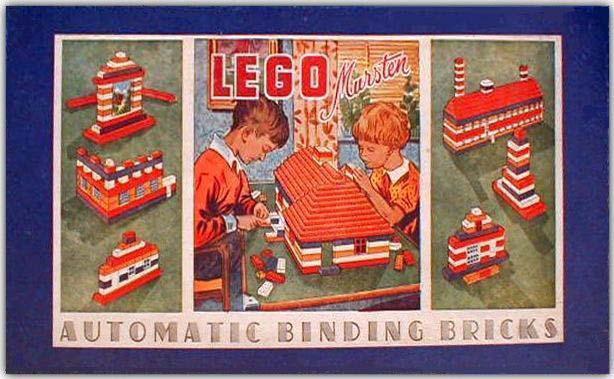