Backlot is an online game from the Studios theme. In the game, players control a page who is working for LEGO Studios. Players go on a variety of adventures.

The game stars the main player attempting to break into the movie business, beginning by working as a page for LEGO Studios. He goes on a variety of adventures while running errands for different members of the crew and, in doing so, exploring the studio grounds. Such errands include finding missing items, delivering items, and fetching coffee.

In the game, which utilizes a third-person perspective, the player controls the page, who interacts with other crew members and performs tasks for them. The player can move around using the arrow keys, jump using the spacebar, and run by pressing the "z" key, and they can interact with other characters by pressing "Control" to talk to them and using the number keys to answer questions. The player also collects items throughout their missions, which can be accessed later by using the "shift" key to open the backpack. The player travels around the various areas of LEGO Studios, such as the locker rooms, sets, and cafe, throughout their missions, which the player completes through the interaction with other characters or the use of the items they collect.

In level 1, the player arrives at the entrance to the backlot, where Johnny Thunder complains about losing his hat, binoculars, and pistol. 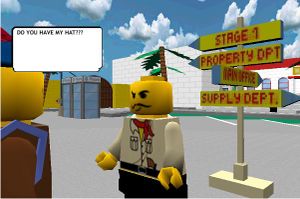 The player talking with Johnny Thunder.

After this, the player explores the backlot. The hat can be found behind several stand-up pictures (which can be knocked down.) The pistol can be found when trying on a Johnny Thunder costume. After returning these to Johnny, he gives you an autograph, which can then be given to a fan among the crew. After giving her this, she expresses her thanks, and says that Johnny's binoculars might be found on the forklift. However, the forklift requires a key to operate, but the key is found when the Gaffer working on lights is accidentally electrocuted. When the binoculars are returned, the level is complete.

In level 2, the player, now a member of the crew, goes to the lockers to get a radio. Then they must move to Stage 2, where the crew has all fallen asleep. The player traverses the catwalks and electrical wires, and each of the crew members mentions their favorite kind of coffee. Then the player can go to the coffeehouse and get some coffee to return to the crew. After the coffee is given out, the level is complete.

In level 3, the player goes to Stage 1, where multiple misfortunes hold back progress. The player can put on stuntman gear and jump over several alligators in a tank. They must then climb up a slide onto a catapult, and then land on a tower with a piece of rhubarb pie. This can be given to a crew member to cheer up a sad dinosaur, "Rex". At the coffeehouse, the player meets the lovesick scriptwriter, and can deliver some flowers to his girlfriend. Then they say that the scriptwriter is the secret admirer, and she expresses her love, which cheers up the scriptwriter, and the level is complete.

This is a description taken from wayback.archive.org. Please do not modify it. (visit this item's product page) WELCOME TO THE LEGO STUDIOS BACKLOT!

Here's your chance to break into the movie business and join the exciting world of a film production company!

If you're lucky, you might even be able to work your way up the ladder of success and become LEGO Studios' hottest new director.

PLEASE LOG IN FIRST in order to save your game and go past the first level. Or, if you only want a short-lived life in the cutthroat world of this cutting-edge 3D game, just click here to PLAY the first level.

Retrieved from "https://en.brickimedia.org/w/index.php?title=Backlot&oldid=1412609"
Categories:
Hidden categories:
... more about "Backlot"
RDF feed
ShopDescription
WELCOME TO THE LEGO STUDIOS BACKLOT! … WELCOME TO THE LEGO STUDIOS BACKLOT!</br></br>Here's your chance to break into the movie business and join the exciting world of a film production company!</br></br>If you're lucky, you might even be able to work your way up the ladder of success and become LEGO Studios' hottest new director.</br></br>PLEASE LOG IN FIRST in order to save your game and go past the first level. Or, if you only want a short-lived life in the cutthroat world of this cutting-edge 3D game, just click here to PLAY the first level.</br></br>Requires Shockwave version 8.5.</br></br>Click here for HELP.ockwave version 8.5. Click here for HELP. +