Cookies help us deliver our services. By using our services, you agree to our use of cookies. More information
Navigation
Actions
Reviews
Fan space
ShoutWiki messages
Wiki tools
From Brickipedia, the LEGO Wiki
(Redirected from Creature and Character Building System) 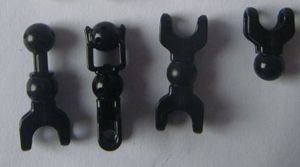 The Character and Creature Building System (often abbreviated to CCBS) is one of The LEGO Group's main building systems, used primarily in Constraction themes. It was introduced in 2011 with Hero Factory and has been used in all Constraction themes since, plus some System sets.

LEGO wanted a new constraction building system to replace the original one used in themes such as BIONICLE. The designers created a new, simpler system designed for use by young kids [1]. The designers wished for the system to be an improvement on the original system, with the end result being more modular, easier to assemble, and more durable. 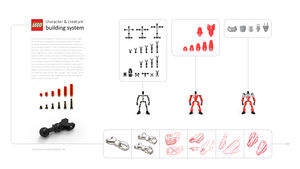 CCBS was designed with both the original BIONICLE system and traditional system in mind, with the end result being a cross between the two. While CCBS is ball-and-cup oriented, parts come in different sizes that are much like traditional bricks. The different sizes enable builders to create figures in different scales. Sizes are denoted by numbers that are equal to brick sizes, for example: A size 5 shell is 5 studs long; A size 4 bone is 4 studs long etc.

CCBS consists of 3 layers; Bones, Shells and Armour. Bone pieces are the center of the build, determining the shape and size of the figure. Bones are primarily Black, but have been released in Dark Stone Grey, Red and several transparent colours. Bones follow the same design principle: Ball on one end, cup on the other. Depending on the size of the bone, there may be a second ball in the middle of the piece that can be used as another connection point. This ball is typically used to attach shells to the build.

Shells are the middle layer of the build. Shells attach to ball joints and cover bones, allowing the figure to have coverage and color. Shell pieces are often the outermost layer, but armor may be attached via clips to two holes in the top of the shell.

Compared to ball joint elements designed for BIONICLE and its predecessors before the CCBS came about, the CCBS is a clearer system with similar parts in different sizes consistently using the same connection points. Older BIONICLE pieces often introduced new elements to achieve a specific texture, shape, or function (such as the spherical Bohrok or deformed Toa Hordika) only for most of those pieces to resurface only on special occasions (if not disappear entirely) in subsequent waves. This began to change in 2006 with Toa and later Glatorian using what fans call the Inika Build, which is similar to the CCBS in using a template for characters across years. However, as before, changes in appearance for the Inika build usually relied on swapping out a specific mold, whereas the CCBS will often use existing pieces in different configurations in an attempt to give characters a unique look. Notably, BIONICLE parts used TECHNIC as an adhesive for armour and body parts. CCBS has less of a need for TECHNIC, trading BIONICLE's style in favor of ball jointed armor, but still has some comparability which frequently sees use in official sets.