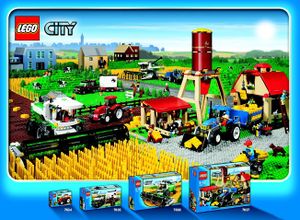 Farm is one of the subjects covered by City's theme. The first farm-related sets were released in 2009, with one set available in late 2008. In the United Kingdom, they were released in March of 2009. The appearance of farm-related sets in City also mark the first occurrence of this subject in a System theme ever. Although farms and various agricultural machinery had already been seen earlier in DUPLO and TECHNIC, this subject was never covered in System. Sets involving equestrian sports, like 7635 4WD with Horse Trailer, however, were already present in the original Town theme with sets like 6379 Riding Stable from 1986. The Farm subtheme includes three unique tractors and two trailers. There has not been any implements released as of yet. The Farm series has included variations of farm life which include cattle and swine. As the Farm series is a popular theme in the DUPLO line, LEGO may choose to expand this series in future sets. However, no known proposed sets have been hinted beyond the 2010 releases.