Cookies help us deliver our services. By using our services, you agree to our use of cookies. More information
Navigation
Actions
Reviews
Fan space
ShoutWiki messages
Wiki tools
From Brickipedia, the LEGO Wiki
(Redirected from Mata Nui)

Mata Nui's original form, as shown in the BIONICLE comics

Mata Nui may be referring to:

Mata Nui is the Great Spirit that watches over Metru Nui and the Matoran Universe. He was put into a deep sleep by Makuta Teridax. In early 2006, it was revealed that he was not just asleep, but dying. The Toa Nuva awakened him in 2008, but Teridax had taken control of his body when Matoro sacrificed himself when putting on the Ignika, the Mask of Life, saving Mata Nui's life. He was trapped inside the Ignika and shot away from the Matoran Universe. After he landed on Bara Magna he discoveres a huge robotic body,although not as big as his spirit form. He uses this body to fight Teridax. Mata Nui's physical body form had resided under the island of Mata Nui, named after him, until he was awakened. Mata Nui appeared as a set in summer 2009. He has yellow and black armor, a shield, a Thornax Launcher and will be wearing the Mask of Life. And at the middle of 2009, he appeared in a larger set as a titan with a gold mask that Toa Ignika wears but gold. He also appears in the film "BIONICLE: The Legend Reborn". 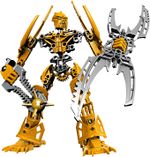 A picture of 2009's Mata Nui set from Glatorian Legends

The Island of Mata Nui is actually the face of Mata Nui. It was the only part of him which remained above water, and his camouflage systems covered it with plants and attracted Rahi to it, so that it appeared as island. It was to there that the Toa Metru escaped form Makuta. When it was time to awaken Mata Nui, the Bohrok decimated the surface of the face until it resembled the robot face once more.