Cookies help us deliver our services. By using our services, you agree to our use of cookies. More information
Navigation
Actions
Reviews
Fan space
ShoutWiki messages
Wiki tools
From Brickipedia, the LEGO Wiki
(Redirected from Kanohi) 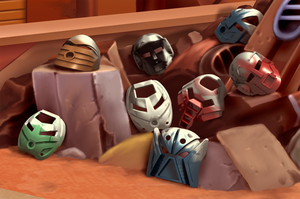 Kanohi Masks are objects from the LEGO BIONICLE storyline, and the most common of the franchise's "collectibles". Many major characters wear these masks, specifically Toa, Turaga, and Matoran.

Kanohi Masks are some of the most well-known items in the BIONICLE universe, being worn by several prominent races and beings including the Matoran (the world's largest race), the Toa (destined heroes), the Turaga (Matoran elders), the Makuta (prominent guardians, now corrupt), and Artakha and Karzahni (famous figures of legend). Very rarely are Kanohi seen removed from these and other Kanohi-wearing beings, because if the masks are taken off for an extended period of time, the wearer begins to weaken; and Matoran will eventually shut down until a Kanohi is placed on their face. 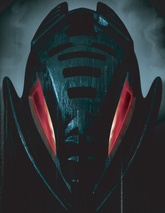 Kanohi Kraahkan, the mask of shadows

Kanohi Masks are connected to their wearers, so much so that when the wearer is physically changed, often the mask changes along with them. For example, if a Matoran gains power and becomes a Toa, then their mask will change from its powerless form into a fully functional Great Mask. Likewise, Toa becoming Turaga will have their masks depowered into Noble Masks. This connection is so strong that for a short time after a wearer's death, an imprint of their spirit lingers in their mask; if enough life energy is infused in this imprint then the wearer can be resurrected from death.

There are several ways to create Kanohi Masks, but the only one known is to melt down Kanoka disks and fuse them together.

There are four different classes of Kanohi in existence:

Kanohi Hau, the mask of shielding

Masks are usually shaped according to their powers, so that a mask's power can be known without trying it on first. Apparently, there can be some variation within standard designs; Lhikan wore a Great Hau that was shaped differently from other known Masks of Shielding, yet could still be quickly recognized as a Hau. Unpowered Matoran masks are made in a shape that represents the power it would have if it were given enough strength. There are only a few known exceptions to this rule:

The mask's level has a bearing on its colour. Masks are usually silver-gray, and when worn they take on the colour of the wearer (though for a short time when the Toa Nuva lost their elemental powers, their masks began to slowly fade back to silver-gray). Sometimes a mask is metallic-coloured, which indicates either a special mask (such as the Vahi and Avohkii) or a special wearer (like the Toa Hagah); metallic masks are generally not any more powerful than plain-coloured versions.

In addition, mechanical enhancements can be built into masks of any level. One fairly common enhancement is a telescoping eyepiece that allows the wearer to see over long distances; this seems to be a standard addition to Great Akaku masks, and possibly Great Matatu masks as well (though as there are only two known Great Matatu wearers - Toa Nuju and Kazi - it's hard to say whether all such masks have eyepieces). The Toa Mahri's masks have also been altered to allow underwater breathing, and Toa Kopaka's Akaku Nuva has adapted to include a laser targeting system instead of the telescoping eye piece.

Different powers are contained by different masks. Here is a list of the known Kanohi, along with their Matoran name and their power.

Technically, any Great-level mask could exist as a weaker, Noble-level version; but these are the ones seen so far in the storyline:

Great Masks are the most commonly-seen Kanohi; worn by Toa and other mentally powerful beings. By being dipped in energized protodermis, they can be upgraded into Kanohi Nuva, whose enhanced powers can be shared with others but can only be used by Toa Nuva (see under "Variations", below).

Legendary Masks contain fundamental forces of the universe. Any being wishing to use these powers must struggle to keep them from running wild, and if a mask is damaged its power will leak out uncontrollably. For more information, see "Kanohi Histories" below.

Most masks have unremarkable histories; they are forged by maskmakers and then worn by their owners for the rest of their lives. However, a few masks have notable histories apart from any wearer:

The Avohkii Mask of Light was forged by the residents of Artakha.[17] The mask was intended to be an insurance against darkness should the Brotherhood of Makuta ever rebel. Being creatures of shadow, with the fear that the Avohkii could be used against them, the Brotherhood stole it from Artakha and hid it away in one of their fortresses.

Some time later, the Brotherhood's bodyguards, the Toa Hagah, discovered how corrupt the Brotherhood had become and rebelled against them. They were caught and mutated into creatures called "Rahaga", but not before they recovered the Avohkii from the Brotherhood's stronghold. One of the mask's guards swore revenge on the Rahaga and joined the Dark Hunters in his quest to reclaim the mask; he was given the codename "Seeker".[18]

When the Rahaga came to Metru Nui some time later, they hid the Avohkii somewhere in the city. After the Brotherhood's Visorak armies invaded the city, the Rahaga instructed the Toa Hordika to recover the six Makoki stones (also in the city) so they could unlock the mask's hiding place and claim it before the Visorak do.[19] The Toa did so, though in the process, Toa Onewa hit the mask with his Rhotuka spinner and encased it in stone in order to protect it.

The Toa brought the Mask of Light with them when they relocated to the island of Mata Nui and became Turaga; Vakama fashioned the stone covering into a totem and hid it in a lava cave, where it remained for a thousand years.

Eventually, a Matoran named Takua, who had a tendency to go off exploring, entered the cave and found the totem; when he dropped the totem into the lava, it melted away and revealed the Avohkii inside. Turaga Nokama was then able to read an inscription on the inside of the mask, which said it belonged to a Toa of Light that must be found. Takua and his friend Jaller set out to find this Toa of Light, evading the Rahkshi that were sent out to claim the mask. During a final confrontation between the Rahkshi and the Toa Nuva at the Kini-Nui Temple, Jaller jumped in the way of a fatal blow meant for Takua. Jaller's sacrifice led Takua to accept his destiny; he put the Avohkii on his face and became Takanuva, the Toa of Light that he had been searching for.

The Avohkii also had the ability to transform its destined wearer from a Matoran into a Toa, much like a Toa Stone does. It also seemed to impart knowledge to Takanuva, giving him the know-how to build an Ussanui vehicle.

Fans often refer to the Mask of Light with the abbreviated term "MoL".

The Ignika Mask of Life was created by the Great Beings to restore the Great Spirit Mata Nui's life energies if needed. With Mata Nui near death after Makuta's attack, it has become the center of several battles between the Toa who wish to save him and groups who want its power for their own gain. The Toa Mahri eventually succeeded in rescuing Mata Nui, but soon the mask will follow their example and take the form of a Toa itself. Also the mask of life was made to keep the universe in order. If there was a famine, if the citizens took to war, if all hope was lost, the Ignika would drain the life from every being in the universe, so that it would all be over. Turning from gold (when Mata Nui was perfectly fine), to silver (dying), yellow (death is imminent), to at the end, black.

The possibility of a Mask of Time being made was known far before it was ever forged. The Brotherhood of Makuta created the Voporak mutant capable of detecting the Vahi's power in preparation for when such a mask would be made; Voporak was then given to the Dark Hunters so that he would not be idle in the meantime.

Just prior to the Great Cataclysm, Makuta (unknown to the matoran,possesing turaga Dume) asked Metru Nui's best maskmaker Vakama to try and forge a Vahi, but this request was forgotten when Vakama became a Toa Metru. Vakama would later remember "Dume's" request during the Great Cataclysm. By that time, the Toa Metru had collected six powerful Great Kanoka Disks, and he was able to combine them and forge them into a Vahi. He tried to use the mask against Makuta, but his inability to fully control its powers proved little help. In the end, the Vahi fell into the sea.

After rescuing the Matoran from the Visorak, Vakama later found the Vahi broken, leaking tons of energy. He was able to repair the damage, only to have it taken by Voporak. He then got caught up between Makuta and the Dark Hunter's leader, the Shadowed One, both of whom wanted the Mask of Time themselves. Vakama was able to get away with the mask when the two began to fight amongst themselves, and when Makuta chased him down he threatened to destroy the mask which would destroy all of reality rather than give it up. Makuta reluctantly gave in to the demands Vakama made, and made himself content with knowing where the Vahi was as he knew Vakama would make good on his threat if he tried to take it again.[20]

A thousand years later, Vakama gave the Vahi to Toa Tahu, who attempted to use the mask against the Bohrok-Kal. Again, it proved little help, but it did give the Toa Nuva enough time to come up with another strategy. Voporak and the Dark Hunter codenamed "Ancient" are currently hunting the Vahi down again after Voporak detected this use.[21] Tahu has since returned the Vahi to Vakama.

The Vahi was originally golden in colour, but later turned orange due to seawater exposure.

Extreme care needs to be taken with the Vahi, as even slight damage would cause its power to leak out and cause temporal anomalies in its immediate area. If it were to be destroyed, the entire timestream could collapse.

As the first of BIONICLE's collectible items and some of the franchise's most recognizable icons, there are several Kanohi masks available.

To be precise, Kanohi were only truly "collectible" from 2001 to 2003, as that was when they were available in random assortments:

Altogether, there are 48 Great Kanohi, 36 Noble Kanohi, and 42 Kanohi Nuva. The Great and Noble Kanohi also came in various alternate colours, in both Matoran and Rahi sets as well as some misprinted colours, but these colours are not listed.

There were also several promotional versions of these masks made:

Since then, new masks have only debuted with new characters. Only the first appearance of each mask shape is listed: