This article is about the group. For the set, see 7138 Rahkshi.

Rahkshi are suits of armour controlled by slug-like creatures called Kraata in the BIONICLE storyline. Rahkshi are often called the "sons of Makuta".

Six Rahkshi sets were released in 2003. They were:

A smaller yellow Rahkshi was released in 2010 as part of the BIONICLE Stars sub-theme. It is a scaled-down version of a Rahkshi of Heat Vision. It was also one of the last BIONICLE sets released.

When a Kraata, a slug-like creature made from a Makuta's evil essence, is exposed to a substance called energized protodermis, it dies and mutates into inanimate Rahkshi armour. A second Kraata of the same type can then enter the armour through a hatch in its head and control it. A Rahkshi's power is at least equal to a stage-6 Kraata's and likely even greater, though it is severely weakened when separated from the staff that it wields. Rahkshi can also shift into a flight mode, but this ability is used for transport as opposed to combat. Rahkshi stand about 8 feet tall and are semi-humanoid in appearance. While all media for BIONICLE shows the Rahkshi's heads splitting open to show the Kraata inside, the toys do not have this feature. Instead, the toy Kraata are enclosed in compartments on the Rahkshi's backs.

When Rahkshi have no mission from a Makuta to fulfill, they act as especially violent and dangerous beasts. But with direction and guidance from Makuta, they have power enough to overtake even the powerful Toa Nuva. Their violent nature makes even the Makuta reluctant to send them out, as they know they will destroy anything in their path. 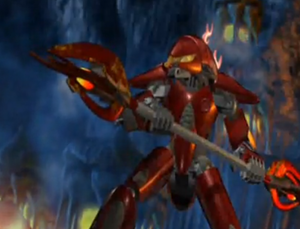 Turahk in The Mask of Light

The best known of the Rahkshi (and the only ones named) are the six who Makuta sent to find and retrieve the Mask of Light: Turahk, Guurahk, Lerahk, Panrahk, Vorahk, and Kurahk. Together, these six were responsible for heavily damaging the villages of Onu-Koro and Ko-Koro and completely destroying Ta-Koro; Lerahk also poisoned Toa Tahu and Turahk killed Jaller before the Rahkshi were destroyed by Toa Takanuva.[1] Makuta probably selected these six as a symbolic attack on the Principles of the Matoran race; for instance, Ta-Matoran follow the Principle of Courage, which is countered by Turahk's Fear.

Later, the Toa Inika, which included the resurrected Jaller, sought to claim the Mask of Life. As one of their tests, the mask brought memories of old enemies to life, including Turahk. While Jaller struggled with the unpleasant memory of his death, he succeeded in defeating the Rahkshi. The memory of death affected Jaller in a later test as well; when a sacrifice was demanded of the Toa, remembering Turahk's attack caused Jaller to hesitate long enough for his teammate Matoro to volunteer.[2]

A thousand years prior, there were a number of Rahkshi in the city of Metru Nui. While searching for the Vahi Mask of Time, Makuta summoned every Rahkshi in the city to attack the time-controlling mutant Voporak. While the entire army of Rahkshi was aged to death by Voporak's defensive field, they caused the distraction needed for Makuta and Toa Vakama to slip away unnoticed. It was here that Vakama learned of the Rahkshi's connection to Makuta.

When the Toa Hagah were mutated by Roodaka, she gave them Rahkshi-like heads and staffs as a kind of sick joke. She called their resulting forms "Rahaga", as a mixture of the names "Rahkshi" and "Hagah".

After taking over the Great Spirit robot, Makuta Teridax frequently uses Rahkshi to maintain order in the universe that he now rules. The Rahkshi become, for example, order enforcers in Metru Nui. The Rahkshi also play a significant role in his plan to confront Mata Nui on Bara Magna. Teridax sends legions of Rahkshi who had been granted stronger armour to the Southern Islands, from which they are released onto Bara Magna to combat the Glatorian who attempted to aid Mata Nui in defeating him. When the Golden Armour is created for Tahu and subsequently scattered by an energy blast from Teridax, one of these Rahkshi picks up one of the pieces, the shield. Once Tahu and his allies collect all the pieces of the Golden Armour, the armour's activation destroys the thousands of Rahkshi that had been dispatched to Bara Magna, with their power being pulled into Tahu. The mass-destruction of his Rahkshi distracts Teridax from delivering a final blow to Mata Nui, and is ultimately what enables Mata Nui to defeat Teridax once and for all, pushing him in the path of the incoming Bota Magna, which takes out his head and kills him.

Guurahk (Disintegration)
Guurahk is one of the most cunning of the team, and has the ability to divine weaknesses - he's able to "see" the stress point in a structure or a foe's weakness, and target it immediately. Guurahk's staff can shoot a cone of dark energy, disintegrating whatever it hits.[3]

Kurahk (Anger)
Though he is fast and strong enough to down any foe, Kurahk prefers to turn his opponents against each other. His staff can fire rings of anger, causing the target to be consumed by rage. Even the Toa Nuva are not immune to its power, which magnifies any difference of opinion into an all-out physical conflict. Kurahk himself is also often in a rage and is often reckless. His Kraata form is just as angry when exposed.[4]

Lerahk (Poison)
The tip of his staff can poison anything - plants, animals, soil, or any foe he might choose. However, his power does not work over a distance - the staff must be in physical contact with the target. He is not the smartest of the Rahkshi, but he is still strong, fast and cunning and his power is enough to destroy things with ease.[5]

Panrahk (Fragmentation)
This Rahkshi's staff sends an arc of energy through the ground or air, which cause the target to explode on contact from short to long ranges. His energies are so potent that the ground under him explodes in a series of tiny bursts, in compliance to his explosive, violent nature.[6]

Turahk (Fear)
Turahk is the Master of Fear. Using his staff, Turahk can induce anything from slight unease to sheer terror in his foes. A being struck by the blast will either run away in panic or remain rooted to the spot in sheer terror. Turahk's power is particularly disturbing to the Toa Nuva, heroes that have rarely known fear. Turahk is also the one responsible for killing Jaller, before the latter was revived by Takutanuva.[7]

Vorahk (Hunger)
Stealthy and ruthless in equal measure, Vorahk uses his Staff of Hunger to suck the strength away from his enemies, and use it himself. It is this method of draining that makes him as fierce as he is. He is also the greatest hunter of the Rakhshi.[8]

These six breeds of Rahkshi appeared in the game BIONICLE Heroes, but the game itself is not canon.

Like Toa and Bohrok-Kal, Rahkshi have the ability to merge into Rahkshi Kaita. In this case, a Kaita not only has the powers of the three Rahkshi that formed it, but a unique fourth power. Similarly to the Bohrok-Kal, the Kaita takes its name after the dominant Kraata. So far only two kinds of Kaita have been seen:

Although only six kinds of Rahkshi have been given names, there are a total of 42 kinds in existence. Here is a list of each Rahkshi power and its colors:[9]