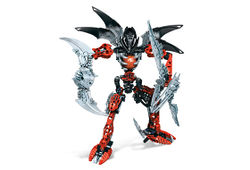 Icarax, a member of the Brotherhood

The Brotherhood of Makuta is a team of villains featuring in BIONICLE's original run, introduced in 2008 following references and allusions as early as 2005. It is an evil organization of beings called Makuta, shadow elementals who were originally purposed with creating Rahi, and later took it upon themselves to govern the Matoran universe. Originally ruled by a Makuta named Miserix, they have since been usurped by Teridax, also called The Makuta, the main villain in the mythos.

In the 2015 reboot, the Brotherhood of Makuta is one of many elements of the story which has not appeared. Makuta, a figure resembling Teridax' initial characterization as Mata Nui's brother The Makuta, is the name of Ekimu's jealous brother.

The Makuta were first made by Mata Nui with the intention to populate the universe with Rahi, though their immense power also made them lieutenants of the Great Spirit. Each Makuta was assigned a region of the universe to protect. After defeating the rebellious Barraki, Teridax, second-in-command of the Brotherhood under Miserix, began to consider the possibility of world domination himself. He betrayed Miserix and took control of the Brotherhood, all Makuta who dissented mysteriously disappearing.

By the time that Teridax usurps control of the Great Spirit robot from Mata Nui, all of the other Makuta, with the exception of Miserix and a version of Teridax from an alternate reality, are left alive.

In addition to elemental control over shadow at the level of a Toa, Makuta also have access to all 42 Kraata powers, shapeshifting, can absorb other beings, and, after being evolved, the ability to temporarily shed their armour and possess others. Some of these abilities were lost by the Makuta Mistika when they were mutated.

Members of the Brotherhood are depicted in the following sets: