Rahi are animals in BIONICLE. Most Rahi live in the wild. The word "Rahi" is from the Matoran language, and roughly translates to "not us" or "wildlife".

Most Rahi vehicles and characters listed were created by the Brotherhood of Makuta, whose original job was to create and alter creatures as needed. The Keetongu and the Manas may be exceptions to this.[1] Some definite exceptions are a number of giant sea beasts that were the first Rahi created and predate even the Brotherhood.[2]

The beings most knowledgeable about the ways of Rahi are the Rahaga, former Toa heroes who have become experts in tracking and capturing the beasts; they now use their skills for the creatures' protection. While living in the city of Metru Nui, they have written extensive records of many Rahi species that appeared there (the BIONICLE: Rahi Beasts guide).

As a general rule, all non-intelligent creature seen in BIONICLE are considered a Rahi, and those that have such intelligence are not. However, there are exceptions to both these rules: a few beings (like Krahka, Tahtorak, Keetongu, and the Artakha Bulls) have humanlike intelligence and are still considered Rahi. At the same time, some lesser-intelligence beings do not seem to be considered Rahi: mindless Bohrok and Rahkshi, and the organic Krana and Kraata that control them, are not included in the Rahaga's records.

While most Rahi are little more than generic animals, a few have appeared in prominent roles in the storyline, either for the special threat they present to the Toa or for their unique intelligence and personality, being full-fledged characters themselves.

Fenrakk are a species of spiders with acidic saliva. They are native to the island of Voya Nui. The most well-known Fenrakk was enlarged by the Mask of Life and forcibly fused to Vezon, as a way of cursing Vezon. The Mask of Life also gave Vezon the ability to absorb kinetic energy, and he shared this power with Fenrakk, allowing them to grow stronger with every physical attack made by them or against them. This ability makes the two unaffected by all physical blows (as they immediately grow strong enough to withstand the attack), and the mask also grants them protection from other dangers such as lava. 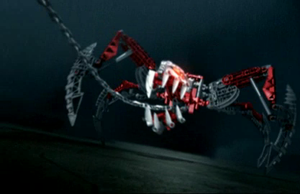 The Toa Inika have tamed smaller, normal-sized "Fenrakk Spawn" to use as mounts in their sieges against the Piraka's stronghold.[3]

When Vezon and Fenrakk were defeated by the Toa Inika and the duo plunged into lava of their own free will, the Mask of Life evolved Fenrakk further into a new dragon-like creature that Vezon called Kardas. Kardas naturally generates concussive force inside its body that it can fire out its mouth; in fact if it doesn't release this force periodically, the concussive force will cause it to explode. It does not appear to have Fenrakk's ability to absorb kinetic energy. Vezon mentioned that if he were to plunge into the lava with Kardas, an even more terrifying 'steed' would emerge with him. 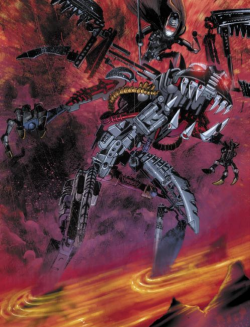 After the Toa took the Mask of Life, Vezon and Kardas were no longer fused, and thus went their separate ways. Kardas traveled to the surface, and has since lost a fight against a Tahtorak that was on Voya Nui. Flying north, it arrived on the island of Mata Nui and was injured in a conflict with the Bohrok. Toa Gali helped to heal its injuries, but what it will do next is anyone's guess.

Keetongu is the name of one of a race of intelligent Rahi, and is the only one of his species has been seen, and might be the last of his kind after his island was conquered by the Visorak.

Although his name is pronounced as it is, Onewa thought it was "The Key to Nongu". 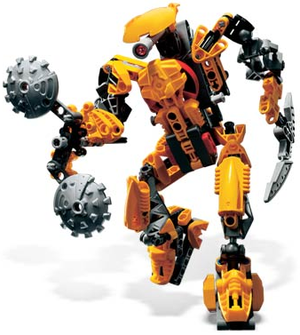 Keetongu lived in a Ko-Metru cave that could be accessed by an underground chute in Metru Nui. The Toa Hordika and the Rahaga found him and got him to help defeat the Visorak and reverse their mutations. In the Toa's siege of the Coliseum, Roodaka baited Keetongu into killing the Visorak's king, Sidorak. When Makuta later came to the city, Keetongu sensed his evil and attacked, only to be beaten into unconsciousness. He now comes and goes from the city as the Rahaga do,[4] but was not present to welcome the Matoran upon their return.

Keetongu can heal anyone afflicted by poison or venom, as long as the poison has not fully taken effect; and his spinning shield array can absorb attacks that he can then send back at his opponent using his Rhotuka spinner (though he cannot absorb the spinners of Roodaka or Sidorak). His single visible eye cannot actually see, but it can detect the good or evil in someone; the eyes that he sees with are hidden behind it. Rahaga Norik even stated that "Keetongu sees with one eye what we have missed with all of ours." He also carries a climbing claw that can be used as a melee weapon. He possesses great strength, rivaling that of a Makuta. As Keetongu is the only one of his race left in existence, it is impossible to tell which powers are shared by the entire race. He speaks in a grinding language intelligible only to himself and the Rahaga.

Krahka is an intelligent shapeshifting Rahi who can imitate any form she has seen and can also gain knowledge of those she copies. She can mix and match pieces of different forms, but only with effort.

Krahka was first encountered in Metru Nui defending her territory in the Archive's Maintenance Tunnels from the Toa Metru. She later joined the Toa Hordika in fighting the Visorak; in a battle in Le-Metru she disappeared with Tahtorak and Zivon into the Zone of Darkness when a nearby Kahgarak's Rhotuka struck the trio. She and Tahtorak were able to escape to Voya Nui a thousand years later, when Brutaka opened a portal there intending to trap his ex-partner Axonn. She then adopted the form of a flying Rahi and then began flying over the Endless Ocean. It seems she is headed for the island of Mata Nui so she can make her way back down to Metru Nui.[5] Krahka is best known for a multi-armed form that combines aspects of the six Toa Metru. According to Rahaga Pouks, the rest of her kind were wiped out by the Visorak.

Pewku is an Ussal crab (see below) that has been a favorite pet of several Matoran. On Metru Nui, she pulled carts for her owner, Orkahm, and after the Great Cataclysm Toa Whenua took a liking to her and suggested they bring her to Mata Nui. Sometime over the next thousand years, she passed into the care of Onepu, who rode her in the Great Ussal Races. Eventually, she was retired from racing, instead giving "taxi crab" rides between Po-Koro and Onu-Koro. It was on this job that Takua met her, and he later on adopted her; She would later be Takua's and Jaller's steed and traveling companion in their search for the Toa of Light. When Takua became Toa Takanuva, he gave Pewku to Jaller. Now that Jaller has become a Toa himself, it is unknown who will take custody of Pewku, but she has befriended Kapura. 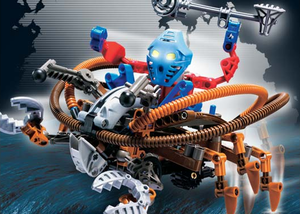 Pewku's name used to be spelled "Puku", and was changed by Takua shortly after the Bohrok invasion. A little while later, just before the search for the Toa of Light, Pewku evolved to her current form, larger than most Ussal crabs.

The Rahi Nui is a mutant Rahi created to serve the Brotherhood of Makuta as a tracking beast for Nidhiki and Krekka, though it was lent to the Dark Hunters for a time. It was specifically bred to hunt Toa and feed on their elemental energy, and it has the head of a Kane-Ra, the forelegs of a Tarakava, the body and hindlegs of a Muaka, the stinger of a Nui-Jaga, and the wings of a Nui-Rama. With the ability to use the aspects of these Rahi to their full capacity, it also had the eight basic Kanoka Disk powers, but lost them in its battle with the Toa Metru, where they made it grow so big its atoms drifted apart (though the creature was able to pull itself back together eventually). It was more recently defeated again when it got its horns stuck in a wall while fighting the Toa Nuva. Toa Lesovikk has also had an encounter with the beast in the past.[6]

Tahtorak are massive 40 foot dragon Rahi that can speak the Matoran language; they have been seen on several islands including Zakaz and Keetongu's homeland. (See under "List of Rahi" below for information on the species in general.) 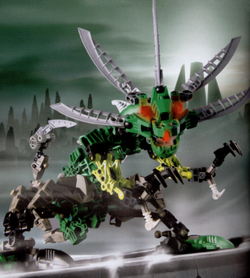 One Tahtorak specifically has been seen in Metru Nui, and it constantly demands "Give me the answer!", without asking his question (which is actually "Where am I?" or "How did I get here?"). It has since been revealed that it was Brutaka who dropped it into the center of Metru Nui just for fun."[7] This Tahtorak was last seen disappearing into the Zone of Darkness with Krahka and Zivon. Ironically, Brutaka was responsible for Tahtorak's and Krahka's escape from the Zone of Shadow a thousand years later, as he opened a gate to try to trap his former friend Axonn in the Zone. While Krahka was able to fly away from their escape point of Voya Nui, Tahtorak was stranded there. It got into a fight with another of Voya Nui's beasts, the Kardas dragon, and won; afterwards Axonn had his associate Botar teleport it away. Botar selected Xia as its destination, and it has begun to go on a rampage - leading to a fight with yet another beast, the Kanohi Dragon. 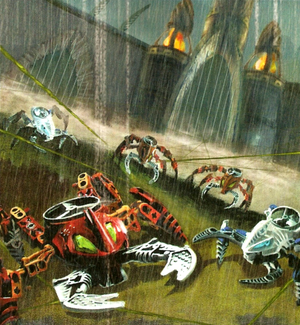 Visorak are highly trained spider-like soldiers, once "employed" by the Brotherhood of Makuta under Sidorak and Roodaka. These armies roamed the world, encasing Rahi and sometimes Matoran in cocoons and spinning webs everywhere. Inside the cocoons, there are sharp barbs that inject the victims with a mutating Hordika venom. The armies are now disbanded and scattered, though some have returned to the Brotherhood's control.

Following a lawsuit by Māori activists, some Rahi names based on the Māori language were changed:

Unrelated to the lawsuit, the "Mukau" was renamed the "Mata Nui Cow" because LEGO's story team felt that the pun on "Moo-cow" was too ridiculous.

The March/April 2004 LEGO Club Magazine presented the Rahi Building Challenge, where entrants could have their creations entered into BIONICLE canon, and the grand prize winner would be drawn into comic issue #21. The following are the winning entries, featured in the BIONICLE: Rahi Beasts guidebook: