8613 Kanoka Disk Launcher Pack is a BIONICLE set released in 2004. It contains two Kanoka Disks, a launcher for a Matoran, and two blue pins to attach the launcher to a Matoran or Toa.

In the BIONICLE universe, Kanoka Disks are powered frisbee-like disks that are seen all over the city of Metru Nui, used in both sport and defense. They are produced in every Metru (city district), and whatever Metru they are made in determines their flight characteristics. Kanoka are also used as the material to make Kanohi masks.

The set contains two randomized glow-in-the-dark disks, two blue pins, and a Kanoka launcher, which can be pinched to fire a disk.

Every Matoran on the island of Metru Nui has a Kanoka, a disk used for sport, fun and defense. Kanoka are very diverse, and based on who crafted the disk, the effort put into it, and what district it was made in, Kanoka will all be very different. They are used by Matoran, Vahki, Toa and sometimes by creatures such as Dark Hunters or Rahi. The powers of Kanoka disks can be helpful, damaging or useful in situations and sport. Basic disks can also be combined to make disks with different powers for specific purposes; levitation and increase weight Kanoka are used to help airships and other platforms ascend and descend; and regeneration disks are built into buildings so damage could be repaired.

Each Kanoka is engraved with a three-digit "Kanoka Code" that describes its strength and special power.

The main sport played with Kanoka on Metru Nui, called "Akilini", is used to determine the worth of Kanoka. If the Kanoka is deemed powerful enough or good enough, then it is sent to Ta-Metru to be made into a Kanohi by the various mask-makers there. Depending on the Kanoka's properties, the Kanohi will come out as a different result.

The first digit in a Kanoka Code describes which Metru the disk was made in. Each Metru's disks fly differently:

These eight disks can be merged in different combinations to create different powers. The only one of these other powers to have an official number code is Time (which can speed up or slow down a target); its code is 9.

The third digit is the power level of the disk. The higher the number, the more powerful the disk power. Higher levels increase the endurance, how long the effect lasts, etc. The highest power level of any disk made in Metru Nui is 8; though six level-9 disks exist (see "Great Kanoka Disks", below). 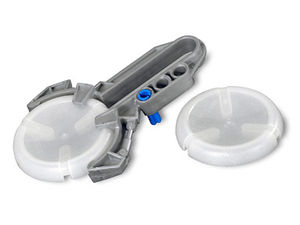 There are six Kanoka Disks in existence with a power level of 9, called Great Kanoka Disks. These disks were made by the inhabitants of Artakha and hidden in the city of Metru Nui. During the time that the Morbuzakh was attacking the city, one Matoran from each Metru found a Great Disk; the Toa Metru were later able to retrieve the Great Disks and use them to destroy the Morbuzakh.

Toa Vakama later found that he could merge the six Great Disks together to make the Disk of Time (code 199, also known as the 7th great disk), he then forged this disk into the Vahi Mask of Time.

When the six Matoran chosen by Toa Lhikan transformed into the Toa Metru at the Great Temple, they found six Kanoka with their names and Kanohi Masks carved on them. These disks bear some of the Toa's elemental power in them. The location of these disks as of now is unknown.

Additionally, Vakama found a Toa Disk with Nuhrii's name on it during the Visorak invasion of the city, and in examining his own disk realized that a previous image had been scratched out with his own name and mask engraved in its place. This disk was one of several pieces of evidence supporting the (ultimately false) idea that Nuhrii and the other Matoran to find the Great Disks were the ones who were supposed to be the Toa Metru. It was asserted that all such evidence was authentic - if deliberately placed in conspicuous locations - so it is likely, though unconfirmed, that the other five Matoran have their own Toa Disks as well.

The following Kanohi masks are made from different combinations of Kanoka Disks:

Kanoka combinations for all other masks are unknown. The Ignika Mask of Life is said to have been forged by the Great Beings, and likely was not made from Kanoka Disks at all.

Although there are 432 possible Kanoka Code combinations (six Metru times eight powers times nine levels of strength), only 50 of these codes were produced by LEGO. Several came with 2004 BIONICLE sets:

The remainder of the coded Kanoka disks, including Great Disks, were available in Kanoka Disk Launcher Packs (in order of strength):

This is a description taken from LEGO.com. Please do not modify it. (see an archive of the product's page) Launch your Kanoka disks and get secret BIONICLE info!

Kanoka disks are used all over the city of Metru Nui for sport and defense. Now you can challenge the enemies of the Toa Metru with a Kanoka disk launcher and collectable disks! Each disk is glow-in-the-dark and features a special three-digit code -- enter the code on BIONICLE.com to earn Kanoka points and access secret BIONICLE® information! Launcher works with any BIONICLE Toa Metru figure. Collect all the Kanoka disks and look for randomly packed rare disks! Each package features Kanoka disk launcher and two disks.

General information comes from the BIONICLE Adventures book series and the "Kanoka Disk" entry in the BIONICLE Encyclopedia; see List of BIONICLE media.