Cookies help us deliver our services. By using our services, you agree to our use of cookies. More information
Navigation
Actions
Reviews
Fan space
ShoutWiki messages
Wiki tools
From Brickipedia, the LEGO Wiki
< Slizer
Slizer (Disambiguation)Throwbot

You may be looking for Slizer, a minifigure from Space Police.

Slizer/Throwbot is a subtheme of TECHNIC that was first released in early 1999. They were known as Throwbots in the United States and as Slizers in Europe and Australia. Nine of the sets in this theme also had different names in these locations. The theme was discontinued in favour of the RoboRiders theme.[source?]

Notably, while LEGO has used ball joints in the past, the Slizers were the first LEGO figures to use ball joints for articulation and movement. Each Slizer/Throwbot had at least one disk arm, which could throw a disk when pulled back and released, and most had a screw-and-gear configuration that allowed movement of the head. The design of their feet would later be reused in BIONICLE in a similar fashion (though not for the Toa).

For images of the different Disks, see [1] 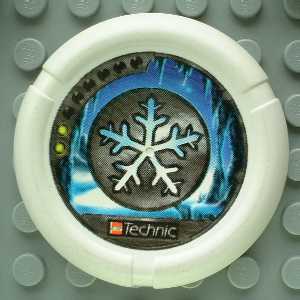 An example of a Slizer/Throwbot Disc

Each Slizer/Throwbot has one to six throwing discs that match one of his colours. The discs depict the Slizer/Throwbot or their surroundings in some form, doing something. These pictures, especially those of the last four Slizers/Throwbots, can be confusing to interpret. On the left portion of the grey metallic picture frame is a wider frame section made up of eight lights, either green, yellow, or deactivated. However, Millennium/Millennia has nine lights on his single disc. It is unknown what these lights represent officially, but it possibly could represent the discs' power levels.

Most of the Slizers/Throwbots, with the exception of Flare, Millennium/Millenia, and Blaster, each have six discs depicting the following.

The Two green lights: A large grey carving/cutout/symbol of their "element"/home. Behind the symbol is a scene of their home.

The Three green lights: The Slizer/Throwbot, in his usual habitat, is throwing a disc at the viewer of the picture.

The Four green lights: The Slizer/Throwbot is traveling using his carrying case as a vehicle.

It also might be noted that Sub/Scuba's case is a different color than it was on the set.

The Five green lights: The Slizer/Throwbot is using one or more of their special powers.

The Six green lights: The Slizer/Throwbot is battling a natural enemy of their home.

The Seven green lights : What the Slizer/Throwbot tries to find to become more powerful.

Two variations of the storyline existed; the North American and European versions respectively, each with different names for the characters and settings.

In the "Multiple Planets" storyline, the Slizers had eight respective planets where each of the eight dwelled respectively: the Fiery Wasteland, the Aquatic World, the Overgrown Jungle, the Icy Mountains, the Industrial City, the Stormy Fields, and the Rocky Canyons. The eighth planet, the Judge Dome, served as a dueling ground or a place to settle disputes. Each of them battled the native mutant wildlife and other threats to their planet. It is debated whether or not this story diverged into the following "Singular Planet" storyline.[source?]

The "Singular Planet" storyline was that there were eight robots fighting a war against each other on one planet split into seven even continents/regions—with the Slizer Dome situated at the North Pole. In this storyline, some have gone to some lengths to say that there were two sides: four were "good" (Fire, Ice, City and Sub), and the other four were "evil" (Judge, Jungle, Rock and Energy).[source?] The concept of facing their respective natural threats in their zones were present, with the inclusion that each of them was trying to find an additional mineral, fuel or other item to make themselves stronger, such as: "Lava Stones" (Fire), "Air Pearls" (Sub), "Ice Crystals" (Ice), "Power Fuel" (City), "Herbal Treesap" (Jungle), "Liquid-Plasma" (Rock), and "Electric Radiation" (Energy). The last power-up for Judge is unknown.

In either storyline, all the characters were evenly matched. Both stories reached a climax when a meteor struck the Slizer Planet and blew apart half the planet, annihilating the Energy, Rock, and Jungle Regions, and heavily damaging the Judge Dome where the Judge Slizer resided. In the North American Throwbots storyline, how this could have happened if there were eight different planets is unknown.

The 2000 Slizer/Throwbots story was never explained fully, which left dedicated fans with many unanswered questions.

The Slizers/Throwbots lived on Continents (Europe and Australia storyline) or on Planets (North American storyline). In total, there are eight Continents/Planets that the Slizer/Throwbots robots inhabited: 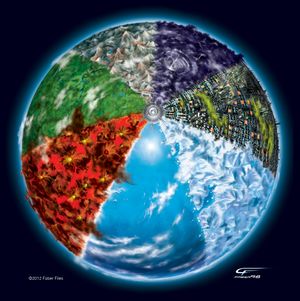 The Sub Continent – Scuba Continent – Scuba Planet This Continent/Planet is almost entirely covered with water. Below the surface, there are many canyons and hills. Known inhabitants include aquatic plants, jellyfish, a plesiosaur-like animal, and sharks.

The Judge Continent – Jet Continent – Jet Planet This Continent, which is also the smallest Continent, is mainly the stadium in which the Slizers/Throwbots compete. It looks like an urban industrial area, with large spaces resembling parking lots or helicopter pads. Metallic-looking pyramids are also seen in some images of the Continent. This continent is located at one of the points where the other seven Continents meet. No confirmed natural inhabitants, but a strange net-like being made of energy appears in one image. In the multiple planet version of the story, the jet planet is a gaseous planet, with the same features as the Judge/Jet Continent.

The Rock Continent – Granite Continent – Granite Planet This Continent/Planet is a rocky desert, very similar to Mars in appearance. There are occasional rivers of water and fluidic plasma. Known inhabitants include a large skull-shaped rock with a red glow coming from its “eyes”.

The Energy Continent – Electro Continent – Electro Planet The frequency of lightning storms in this Continent/Planet make the sky and ground seem a purplish colour from a distance. Tornadoes also occasionally form. Known inhabitants include a monster completely composed of electricity and a living tornado.