Monster Fighters is a theme introduced in May 2012. To date, ten sets have been released. Seven of the sets contain at least one Moon Stone, and in the background story, the monsters attempt to collect them to unleash doom on the Earth by eclipsing the Sun forever, allowing the land of monsters into the minifigure's realm. The stones are based on the monster contained in its respective set. A band of Monster Fighters, led by Doctor Rodney Rathebone, tries to find the stones before the evil Lord Vampyre uses them to eclipse the sun forever.

All the Monster Fighters sets follow a similar pattern. Every one features a lair/vehicle of some sort for a monster with a moonstone somewhere in it and a vehicle for the Monster Fighters. (with the exception of 9468 Vampyre Castle, which contains six moonstones and 10228 Haunted House, which contains no Moonstones, nor Monster Fighters or Monster Fighter's vehicle.) 9461 The Swamp Creature contains a swamp boat for Frank Rock, and a small marshy lair for the The Swamp Creature. 9462 The Mummy includes a chariot drawn by a glow-in-the-dark skeletal horse, and an autogyro piloted by Ann Lee. 9463 The Werewolf includes a large brown tree (of various shades) inhabited by the Werewolf, and an old car piloted by Major Quinton Steele. 9464 The Vampyre Hearse features, as its name would indicate, a hearse driven by the Zombie Driver. It also features a small motorcycle driven by Dr. Rodney Rathebone. 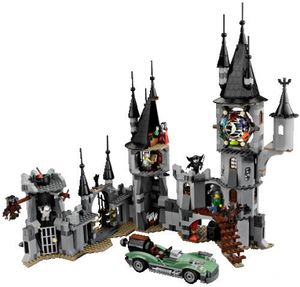 9465 The Zombies features a tomb inhabited by three zombies, a small podium with a moonstone and a large car driven by Jack McHammer. The majority of 9466 The Crazy Scientist and His Monster, consists of a large laboratory, and a small blue car driven by two Monster Fighters. In 9467 The Ghost Train, a very large train, with three Ghosts riding on it is featured, as well as a plane driven by Frank Rock. The largest portion of 9468 Vampyre Castle is a large castle, although it also includes a car driven by Monster Fighters.


There is no particular colour scheme for the theme, although grey and black pieces are featured prominently in many sets, and every one except for 9461 The Swamp Creature and 30200 Zombie Coffin Car contains at least one glow-in-the-dark part. Though each set does include a colour scheme to match either the monster or its background.

Lord Vampyre tapping into the magical powers of the moonstone

Lord Vampyre, a powerful vampire, was pestered by his wife to get her a Moon Stone, but when Lord Vampyre finally found it, he realized the magical power it possessed and decided to keep it for himself. If six of them were brought together (though there are actually seven in total), they would eclipse the sun and turn day into night forever, so the monsters could roam freely, and they could get to the minifigure realms. To defend the earth from this new spooky threat, Rodney Rathbone put together a band of monster fighters to retrieve the stones before Vampyre collected them to unleash their power on the world. These monster fighters include Frank Rock, Major Quinton Steele, Ann Lee, Jack McHammer, all with monster archenemies and personal vehicles.