This article is about the minifigure. For other uses of the term, see Santa Claus (disambiguation).

Santa Claus is a festive minifigure bringing Christmas cheer to other minifigures. Santa Claus is available in many Holiday LEGO sets, in fourteen different variations. The character appears in various video games and as a brick built figure, as well.

Each of Santa's variations have a yellow head. All but one, wear a red bandana, which is tied in a low bow knot at the back. All of his variations up to his redesign also have a long white beard. The beard falls down his torso, it has a mustache and large sideburns moulded into it.

Santa's first appearance was in 1995, in the set, 1807 Santa Claus and Sleigh. This variation includes a face with two black dotted eyes and a closed smile. He has an unprinted red torso, red arms, yellow hands and grey legs. 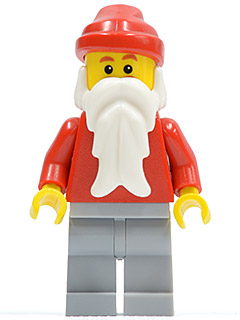 Santa's sixth variation was the first to contain eyebrows and pupils

Santa's sixth variation was in 7904 City Advent Calendar. This was the first variation to include a face that wasn't the classic face with the closed smile and hollow eyes. Santa now has curved bright orange eyebrows over his eyes, with the right being slightly highered. Santa eyes are black, but contain small white pupils in the top right corner of each eye. Santa has an open smiling mouth, showing his white teeth. The mouth is decorated in orange facial hair. The variation is the first and only variant to contain a light bluish grey leg colour. Santa's torso, arms and hands remained unchanged, leaving them red, red and yellow.

Santa's seventh variation appeared in 7687 City Advent Calendar. Santa's eyebrows are curved and are a dark red colour. This was the first and only pyiscal version to include glasses. Santa's glasses have white square shaped lenses, over his black eyes and pupils. The frame front and temples are left black. Santa's mouth is closed and smiling. The variation was the first to introduce a different hand colour other then yellow, white, which severed as his gloves. Santa's legs, arms and torso are plain and red.

Santa's fourteenth variation debuted in 8833 Minifigures Series 8, which allowed new face and torso prints, along with a newly moulded hat and beard. The set had no elements from the previous variations, apart from his legs and arms being white and his hands being white. he has the classic Santa hand with a white bobble and white ruff, a smiling face with a white beard, a short white beard, a red torso which has a coat printed on it with white ruff outlining and a black and gold belt, he has red arms and white hands and red legs, he carries a brown sack for an accessory.

Santa makes appearances in 4850307 LEGO Battles and LEGO Battles: Ninjago. His appearance in both of these games are just a pixilated version of his second variation.

Santa Claus is a jolly old man who lives in a workshop, at the North Pole. Each year he receives Christmas letters from children around the world. He reads the letters and then decides wether the children are naughty or nice. If the children are nice, the elves create gifts for them, occasionally they wrap them. Santa places all the gifts into his bottomless sacks. On December 24, Santa travels around the world in his magical sleigh pulled by reindeer. He accesses each house, by the chimney and leaves presents them under the brightly decorated tree. He makes sure he delivers all the presents before Christmas morning.

Santa is married to Mrs. Claus, who feeds him baked goods and candy canes. Santa also likes drinking hot coca and coffee. During the summer months, Santa goes on vacations to warm countries, such as Fiji.