Okay, some stuff, but the face of God is probably the only thing more blinding than nostalgia.

If I am going to complain about Nexo Knights being uninspired and lament Hero Factory for not living up to potential, it's probably only fair that I discuss a theme which I think did hit the mark. It's a little bit old and probably not what most people think of in regards to the big bang themes since it was lacking a strong media tie-in--it just had some online webcomics--but it did have a huge amount of sets for one year and a weird board game that was included in the three larger sets. I never actually played the board game because I missed those sets, but Orient Expedition did things for me that I hope Ninjago and Chima are doing for today's kids and I have a hard time believing that Nexo Knights will--that's the reason Nexo Knights bothers me more than Chima. I'm sorry if everything seems to go back to that, it's just nice that I can finally articulate it.

I haven't got any idea if the story is actually good--I mean, this international robber guy teaming up with the emperor of China is probably a little silly--but the story is basically that Adventurers is rebooted and back (possibly the first reboot of a LEGO property? Unless we count Island Xtreme Stunts?). Johnny Thunder, Pippin Reed, and Dr. Kilroy discover part a map in Marco Polo's home which leads to a treasure that was too grand for him to take back to Italy. So they head off to India to find the next clue. And then Mt. Everest and China--making friends and enemies with the locals while discovering treasure, dodging traps, half-animal gods, and their nemesis Lord Sam Sinister. 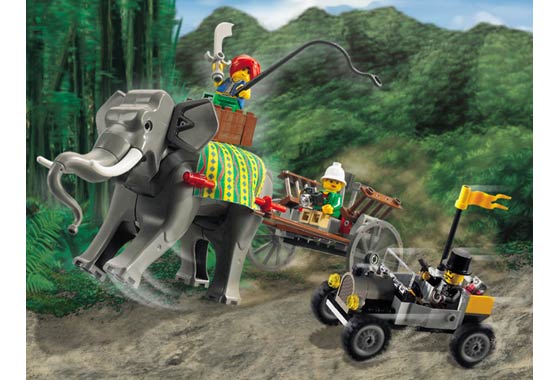 We'll talk about the sets first. That's 7414 Elephant Caravan to the right there, and it was the coolest thing back in the day. An elephant in a high speed chase. Swords! Dynamite! Old cars! Pippin Read! She was my favorite; honestly, I don't remember Johnny doing much other than having a couple of brilliantly odd ideas like stacking elephants to reach a secret attic (because India hadn't invented ladders yet) or putting the golden armor on the Guardian, because the poster boy has to solve the last puzzle. Kilroy ran away from Tygurah and found the sun stone, but Pippin was defeating Yetis and escaping from a prison in the Great Wall with nothing but her camera, allowed to get angry when their engine was ruined and they were captured, having the idea that got the adventurers out of the elephant chase, and showing compassion when she befriended Jing-Lee. Again, nostalgia, so maybe they were kind of slam-panning "girl power!" but I never noticed that she was the designated girl. She was just a cool character doing cool things, whereas things like Nexo Knights feels the need to point out that Macy is a girl in case we don't notice, or even BIONICLE including Gali just so there is a token.

But sets, you know. Sets. The characters were all cool. They were distinct. The architecture was distinct: this theme had a lot of playsets. But even the vehicles were good; you got unique things like the Elephant Caravan and a hot air balloon and just having old-styled cars instead of tanks that double as gattling-guns and oversized motorcycles (though, being fair, those sorts of things didn't really exist until Exo-Force). And then there were monsters.

Which brings me to a place where I probably can be fair. The minifigures don't really hold up. This was coming at a time where LEGO was transitioning from the simple dot eyes and smile faces to the much more detailed and expressive ones we have now. And it shows. The proportions are weird. Pippin's eyes are beady and far apart. Johnny's face is sort of glazed. The expressions are just sort of blank. This isn't just about modern minifigure heads being better in general, but looking at the older Adventurers faces for these characters? They just look better. More personality. More proportioned. The torsos are a mixed bag: some are really good (I particularly like the Everest ones) but others use weird gradient technique or are mostly one color, but then the arms or the torso underneath don't match, and it's like, what? Some others just have weird proportions or don't convey a very clear idea or are strange costume choices in general. And then there are the three monsters, which were kind of weird even back then, but I still love them for their strangeness. 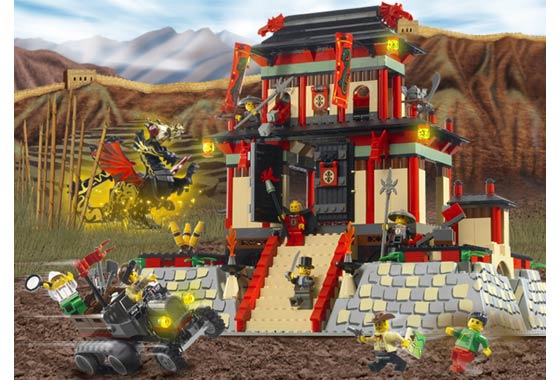 Now we get the anecdotal stuff. Orient Expedition benefited from being part of the real world. Characters from England and Australia? Those were new to me; you'll get characters from those places in American cartoons, but they are never the main characters. And then they have adventures in India, Everest, and China? It turned out my mother had been to those places. It gave me an interest in travel. From looking at old Adventurers sets to see what these characters had been up to before, I discovered Brickset and got involved in the LEGO community. And then there was a side-game on the website about a trip to Greece which was the first time I was really exposed to mythology. Aside from maybe hearing the stories of Icarus in second grade and King Midas probably a year later (I remember those <_> ) was my first exposure Greek mythology when they discovered King Minos' labyrinth, complete with sanitized Minotaur origin. ("The gods were angry with King Minos, and put a curse on his wife.") I did a report on that in the Greece unit of fifth grade social studies, realized that it was connected to the Icarus myth, and have been hooked ever since.

It kind of parallels my experience with BIONICLE, which, maybe I am being affected by recent events, but I kind of look at Orient expedition more favorably. That's favor though; BIONICLE gave me passion and imagination and standards to judge things by (including itself), so maybe it was more valuable even if I am mixed on it. Orient Expedition is sort of like Hero Factory, in that it was sort of niche and maybe not quite as good as it could have been (at least by standards outside of The LEGO Company), but didn't try to be anything more than it was. It gave me something to grow rather than to grow with. That's what happened when I was a kid. I didn't wait with baited breath for the next set of leaks, or even new sets to come on the shelves. I didn't know when it would happen. I was content to keep collecting the ones that were already there. And yeah, I would eventually notice when no more did come, and yeah, I was disappointed but I was okay. I had other things. My life didn't revolve around a single escapade. And the characters went on. The theme finished its story and had room for these chaps to keep doing what they do. All of that "when I was a boy" is a discussion for another day though; probably a "What's wrong with Super Heroes?" if you want to keep an eye out (because I realize that isn't an obvious connection to make :P ).

So that is what Orient Expedition was really about for me. It's not Ninjago. It's not BIONICLE. But it expanded my horizons, helped me learn more about the world around me, and introduced me other interests to look to when it did come to an end. I hope that the rest of LEGO's themes find ways to do the same thing, because really, you don't need to be a big bang to do what Orient Expedition did. You just need a taste for the exotic and a sense for adventure.

Well this was a really good blog! (Though the last line sounded like something from a SPHE classroom. ;P)

I was a bit to young for these themes, I think Exo Force was the theme out when I was a kid and I had no interest in that. I actually didn't really collect LEGO until Atlantis came out in 2011. I don't think I have a deep connection to anything as much as you do with this theme, maybe Scooby? IDK :P I do think LEGO should do something about travel and adventure in the future. Ninjago is set in a very small world as is Nexo Knights and I don't think Chima really fleshed out their expansive world in the sets. I never knew LEGO was your connection to Greek mythology. We had it shoved down our throats in Europe, E.U. thing? :P. Hmm I wonder what I'd do it they discontinue Friends, I probably wouldn't be as calm as you but I'd still have Scooby. :P Speaking of which I wonder will LEGO ever discontinue their current Big Bang themes, Friends and Ninjago at least seem to be doing exceptionally well. Nothing compares to City and Star Wars.
I don't really like the idea of keeping everything evergreen, we only got one new non licensed theme this year with Nexo Knights and that's disappointing. Do things like Elves, Disney Princess and Speed Champions need to last forever? I understand them wanting to have brands but surly City, Ninjago and Friends should be enough until they find something else that sells like crazy?

You should do a what's wrong with for every theme! :P

Thanks. I could see Scooby doing the same thing with someone else. Lots of monsters but none of them are real, 60s motifs, mysteries.... :)

Don't worry. I wasn't calm when BIONICLE ended the first time. :P I really can't say if Friends and Ninjago will last forever. Barbie and MLP seem to. TMNT and Transformers sort of have, but at one point it did seem like BIONICLE would be around forever, so....

I don't think I could if I tried. There isn't anything I can say for some of them. Even Chima I won't do unless I have something new to say, but we'll see what happens. :P
Permalink
You are ignoring the author of this comment
Show comment | Manage ignore list

I don't think either Orient or Xtreme Stunts are reboots. They are sequels.

I actually forgot that was a possibility.