6923 Particle Ionizer is an M-Tron set released in 1990. It contains a spacecraft that appears similar to a helicopter, a robot and an M-Tron astronaut. 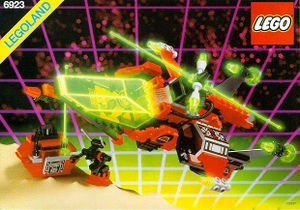 The Particle Ionizer is the third-largest M-Tron set. It is red and black, with transparent neon green parts. At the top are lasers, which could also be receivers. The ship has two fins, and on each is a thruster. The ship has three or more lasers, one in front and the rest split evenly between each side. On the back of the ship is a magnet to carry magnetic containers.

In addition to the ship is a robot and magnetic container module. The robot is about the size of a minifigure, all red and black. The container module has a magnet on top and a radio transmitter. It also has an opening lid which allows objects to be stored inside.