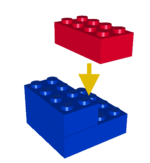 Proposed Mergers lists articles that are proposed to be merged into other articles.

To propose an article merger, put {{Mergeto}} on the top the respective page and, then click here and replace Page 1 and Page 2 with the names of the two articles that you want to be merged together, and replace Page 3 with the name of the article you want them merged into. Please note that Page 2 and Page 3 can be the same article, if applicable. Briefly explain why you want the articles to be merged directly under the header, and then sign (~~~~) directly under the ;Support section. If you object, please supply concrete reasons for doing so.

Not really sure how to explain, but aren't they basically the same thing? "The LEGO Group" is the official name of the company, so we could have LEGO redirect to that page.

These two pages represent the same characters, though The LEGO Batman Movie variant was given its own page, thus dividing them for no apparent reason.