TECHNIC is a LEGO theme primarily based on creating model machines and mechanical toys with specialized beams and connectors. The theme is designed for ages 9 and up, and was first introduced as the Expert Builder series in 1977. In 1984 it was renamed as "TECHNIC".

TECHNIC did not introduce gears or cross axles. The first gears were introduced in 1965 and were available only in North America as they were manufactured under license by Samsonite.[1] They had round holes in the centre, as the cross axle did not exist.

LEGO released the first European gears in 1970.[2] At the same time, cross axles and bushes were introduced, which are still used in TECHNIC sets today. The first universal joint also appeared around this time.

The gears before TECHNIC are much larger and incompatible with those introduced with the TECHNIC theme.

The TECHNIC theme is characterized by the presence of TECHNIC bricks, axles, gears, connector pegs, and many other parts rarely seen in typical LEGO System sets. TECHNIC is still currently an active theme, and is one of the longest-lasting themes in LEGO history.

In recent years, System sets have begun to adopt previously TECHNIC-exclusive parts, particularly in Exclusives and Star Wars sets. Many modern sets, including TECHNIC sets themselves, blur the distinction between the two systems to a considerable degree. 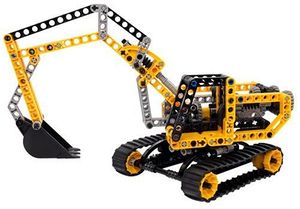 An example of a typical TECHNIC set.

Mindstorms, a LEGO line of robotic products, also uses a large number of TECHNIC pieces, although it is sold as a separate line of products. Both the Mindstorms NXT (August 2006) and EV3 (2013) are based on the stud-less construction method. 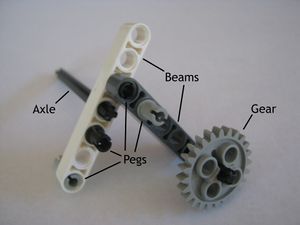 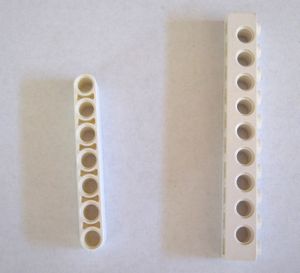 The major parts in LEGO TECHNIC are listed below:

The logo accompanying a set. 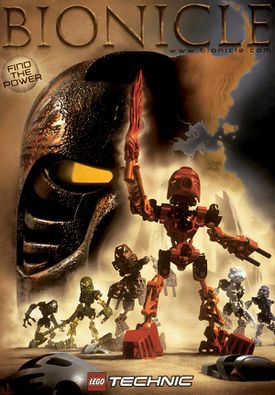 A 2001 Bionicle poster, with the Technic logo at the bottom.

TECHNIC has always had a variety of different electric motors. Some are connected via built-in batteries, others use connected battery boxes, and still others run on mainly electricity using a transformer. Most modern sets use batteries.

Early TECHNIC motors used the standard 4.5V system, interchangeable with the Trains theme and consisted of a large brick with a small protruding axle. When the motor is activated, the axle rotates. From 1990 onward, this was changed to the 9V system in line with other LEGO themes. The output rotation has a high RPM, but low torque, so it cannot be used to turn heavy objects without additional gears. Later motors contained a hole into which an axle of any length can be inserted. 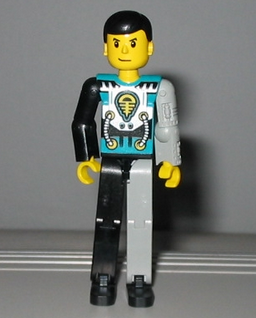 An example of a Technic Figure.

TECHNIC Figures were a form of minifigure that were used in some TECHNIC sets ranging from the mid 1980's to 2001. They mainly appear in the Arctic Action and Competition themes. TECHNIC figures were much larger than conventional minifigures, and had more joints. These were similar to Belville Figures.