7317 Aero Tube Hanger is a Life on Mars set released in 2001. The largest of its line, it contains five alien Minifigures. It is the Martian base, and includes an air pump and tubes for transporting them.

The Aero Tube Hangar is the largest Life on Mars set. The base is made up of multiple sections, all removable and interchangeable. The largest part of the set is the central section. It is also the tallest part. The main feature of this section is the pump and the router, which allows you to choose the route of the martians in the tubes. Above it is a small, unmanned spaceship. It has two propellers for propulsion and detaches from a control center. Above that is a tall structure with no known purpose. In the back section is a place where the Orange Boulders are placed. They can be placed and lifted by a crane arm. Around the boulders are three breakdown lasers and scanners. 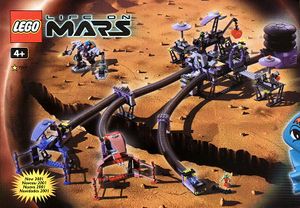 On either side of the base are towers. They can both be removed and attached to other structures or even each other. One of them carries many tools/weapons and has a rocket, while the other has a control panel. They can be attached to the non-vehicle section from the Excavation Searcher. 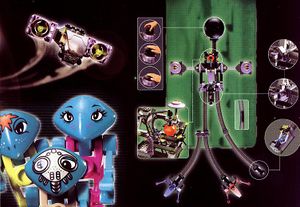 A catalog page showing off the Air Pump System

Two tubes connect the Aero Tube Hangar to another router and a pod. The router directs the Martians to one of two ports, colored Red and Sand Red or Blue and Sand Blue. The ports have a row of lasers, although they could simply be gates. On top of them is a uniquely-patterned plate from the theme. They can attach to the three larger Life on Mars (Martian) vehicles, allowing Martians to board them. The other tube goes to a smaller port. It is not elevated like the other ones and does not connect to vehicles.

In addition to the land base, this set comes with a small robot. It is a two-legged robot, with a hook and a laser. It's cockpit is small and open-aired. The legs have "kneecap" like bricks on them.

The Aero Tube Hangar is the base of the Martians. It is used to transport them to and from vehicles, and to extract energy from rocks.