7570 The Ostrich Race is a Prince of Persia set released in 2010. It contains two Ostriches. Minifigures included are Dastan with a bare-chested torso, Sheik Amar, the Ostrich Jockey, one scorpion, one snake, and two ostriches. There is a viewing tower included for Amar to watch the race, a weapon rack and stables for the ostriches to be released from.

The set is made up of three different platforms. The first is the weapon's rack. There is nothing much to it, except many weapon holders for Ostrich Jockeys to hold their items while they race. On the left bottom corner is a Part:30176, which is Plant Brick 1 x 1 Round with 3 Bamboo Leaves. The weapon holders have two spears, the Ostrich Jockey's whip (box art and images only), and a battle axe. Also in the back is a golden flag and pole, which is used again on the Watching Tower.

The Watching Tower is built upon a tan Part:3032, which is Plate 4x6. It contains a Part:4589, which is Cone 1x1, that is used to hold the Ostrich Jockey's whip (Instruction Booklet only). Two Part:43888s, which are Brick 1 x 1 x 6 Round with Square Bases, and two Part:2453s, which are Brick 1 x 1 x 5s, hold up the top of the tower. On the tower base is a railing consisted of two brown Part:4589s, one flat tile 1x4 with holed extension, and a flat tile 1x4. In the instruction booklet, it says to place the Scorpion inside the tower. There are two flags and poles on the top. One flag is gold, which is on the left, and the other one red, which is on the right. 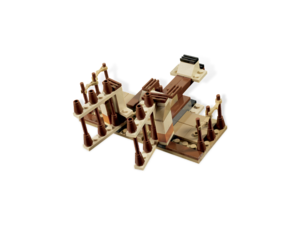 The 7570 Ostrich Race contains 7 minifigures; 3 actual, 4 animals. The three actual minifigures are Dastan with his bare-chested torso, Sheik Amar, and an Ostrich Jockey. Dastan's torso piece is Part:973px666, which is Minifig Torso with Bare Chest and Muscles Pattern, which has only been seen in one other set, 7683 Fight on the Flying Wing. Other than this, Dastan is built with his other common pieces; black, printed legs, two swords, and sword holder. Sheik has a new tan turban, a new Prince of Persia-exclusive torso that has pattern of a tan patched up robe, and light black belt with swirl in the centre, and tan pants. Both his head and torso are double printed, with a nervous face on the back the head. Finally, the Ostrich Jockey has another Prince of Persia-exclusive torso with tan arms, tan torso with beads going down the front of the torso, and some kind of light blue underwear showing out. He has brown pants, black hat, grinning face, and whip. Only his torso is double printed.

There are 4 Animals in the set. They are a scorpion, a snake, and two ostriches. The Scorpion is the regular black version, and the Snake is coloured red. The Ostriches are made up from two pieces. Its head is a light pink/tan rubber mould and has a beak and carved mouth on it. On each of the bodies (which is primarily black) is a white section, which represents the tips of its feathers. This is also done in the back of the minifigure. The Ostrich is moulded with four holes. This allows minifigures to sit or stand on the ostrich. The legs of the ostrich are also light pink/tan that covers a 4x4 flat piece.

While searching for the mystical Dagger of Time, Dastan found himself at the Valley of the Slaves. Inside, he met up with his old mentor Sheik Amar. After having a joyous reunion, Dastan was brought to a secret path. Amar left, and turned on the lights. Dastan was trapped and forced to ostrich race against one of Sheik's Ostrich Jockeys. They started after the gambling ended. Dastan won after the Jockey was eliminated. He escaped moments after his win. Unlike the set, in the movie the race was to run from the ostriches.

This is a description taken from LEGO.com. Please do not modify it. (visit this item's product page) Who will win this wild ostrich-riding race?

Creeping into the Valley of the Slaves, Dastan has discovered Sheik Amar’s secret den. Suddenly, with the flick of a lever, a high-speed, out-of-control ostrich race begins! As the kingdom’s outlaws gamble on the winner, can Dastan use the chaos and the very large, very fast riding birds to escape from the illusive Sheik?

$29.99 +
Released
April 2010 +
SetType
Regular sets +
ShopDescription
Who will win this wild ostrich-riding r … Who will win this wild ostrich-riding race?</br></br>Creeping into the Valley of the Slaves, Dastan has discovered Sheik Amar’s secret den. Suddenly, with the flick of a lever, a high-speed, out-of-control ostrich race begins! As the kingdom’s outlaws gamble on the winner, can Dastan use the chaos and the very large, very fast riding birds to escape from the illusive Sheik?</br></br>* Includes 3 minifigures: Dastan, Ostrich Jockey and Sheik Amar</br>* Also includes a desert creature and 2 of the first-ever LEGO ostriches</br>* Features movable gates and traps</br>* Beware of the desert creature!</br>* Turn Dastan's head to change his expression!</br>* Ostriches each measure 2" (5cm) tall</br>* Platform measures over 4" (10cm) high</br>* Gates measure 5" (13cm) wide</br>* Collect all the LEGO® Brand Prince of Persia™ sets!ll the LEGO® Brand Prince of Persia™ sets! +
Theme
Prince of Persia: The Sands of Time +
Title
The Ostrich Race +
Txt1
Dastan (Shirtless) +
Txt2
Ostrich Jockey +
Txt3
Sheik Amar +
Type
Set +
USPrice
$19.99 +