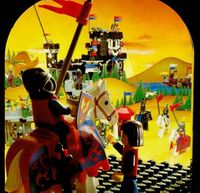 Black Monarch's Castle seen through an archway in a catalog from 1988.

The first well known Black Knights set released was the 6085 Black Monarch's Castle in 1988, which marked the beginning of the Black Knights series. The enormous black castle was guarded by twelve knights, four of them mounted on horses. This was one of the first sets to include the horse armor piece or barding. Also, the triangular dragon shields were originally invented to represent the Black Knights. An interesting feature the castle had was that it could be opened and closed using the special "hinge" pieces for more play in the interior. In 1989, three Black Knights were included in the Knights' Challenge set. Two more Black Knights sets were released in 1990, which were 6059 Knight's Stronghold, a set that featured a town gate and five knights along with a big catapult, and 6034 Black Monarch's Ghost, a set that included a lone armored knight and a glow in the dark ghost. These two sets were one of the last LEGO Castle sets to carry the LEGOLAND banner. The two 1990 castle sets were re-released in 1992 with the LEGO System banner on the boxes, but the instruction booklets of the sets, still had the LEGOLAND banner. The only changes that were made to the 1992 re-release sets, were the horse saddles. The saddles were changed from one clip to two clips since 1992 was the year that introduced the altered LEGO horse saddle.

The Black Knights are now pitted against the bandits from Wolfpack.

In 1992, the LEGO Group introduced the 6086 Black Knight's Castle that was originally called Dungeon Master's Castle until 1994, when the name was changed during its last year. Mounted on a raised baseplate, this was the largest set in the Castle theme during its production run, being considered one of the best castles ever released. It included four mounted knights, six soldiers/guards, a Wolfpack renegade prisoner, and a glow in the dark ghost.

Like Black Monarch's Castle, it included the horse armor or barding piece, but now two out of the four mounted knights had helmet visors and breastplate armor pieces like the knights introduced in 1990. There were new dragon plumes available in four different colours (just like the feather plumes), as well as introducing a new oval shield with a red and blue dragon printed. The older dragon triangular shield continued to be used in the set, to be carried by foot soldiers. This set was the first major castle to have minifigures with facial hair, mustache and beard faces rather than only having the usual plain, grin face.

Two other main Black Knights sets were released 1992 as well. There was the 6057 Sea Serpent, the biggest LEGO Castle boat ever released in the 1990s and also the last set to include Black Falcon figures. The other was the 6009 Black Knight, a small set that included a single, full armored knight, along with new accessories such as the oval shield, dragon plumes, and beard face.

In 1993 four smaller sets were released that did not appear in any catalogue. Instead, the sets from 1992 were still included until the end of 1994 when the Black Knights ceased to exist as a proper Castle theme. 1993 also saw the introduction of the new Dragon Masters theme, which reused the oval dragon shields but featured green dragons instead of blue ones. The theme also reused the "dragon plumes" introduced in 1992.

The second castle of the Black Knights.

With two castles, a fortified gate (6059 Knight's Stronghold) and two smaller buildings (6034 Black Monarch's Ghost and 1888 Black Knight's Guardshack) the Black Knights were a faction that was especially strong on buildings. However, they didn't own any noteworthy land vehicles, such as carriages or carts (except the debatable appearance in 6079 Dark Forest Fortress). Even their complement of war material is far from impressive, with only one mobile siege engine (1971 Battering Ram) and two stationary catapults (1491 Dual Defender and 1917 King's Catapult). A fact that is partially remedied by a rather large fleet for a Castle faction, encompassing a big sailing ship (6057 Sea Serpent) and a boat (1547 Black Knight's Boat), only comparable to the fleet of the Crusaders.

Their first castle, was similar in layout to the Crusaders' King's Castle and reprised its fold-out feature, but used mainly black elements and had an overall more elaborate design with less repetitive outer walls and octagonal towers. The Black Knights' second castle made use of the new raised baseplates. Another notable building was a gate with foldable walls that was obviously intended to be used as a supplement for the previous castles since it was no enclosed structure.

The Black Knights' coat of arms and main symbol was a blue dragon as seen on their shields and actually resembled a classical wywern dragon. This heraldic animal had only two legs and the wings in contrast to the dragons seen in other LEGO sets that had four limbs in addition to their wings.

The dragon first appeared on the classical triangular shields and a small flag included in the first set 6085 Black Monarch's Castle from 1988. In this first crest the blue dragon had yellow accents in the form of its beak and tail tip. The background was red. On the oval shields that appeared after 1992, the background was changed to yellow and the details of the dragon were now red.

The Sea Serpent was the largest boat of the Black Knights.

The dragon motif also appeared on horse bardings. In 1992 various other forms of presenting the dragon symbol were introduced. The Black Knights were the first ones to trade the old feather plume for a new "dragon plume" that consisted of a small dragon figure mounted on the top of helmets with movable visors and two small dragon wings mounted on the helmets' sides. The dragon plumes were also used as ornaments on castles and ships and were later reused in the new Dragon Masters theme where they were mounted to entirely new helmets. 1992 also saw the introduction of a rare flag which was only available in 6086 Black Knight's Castle. The flag had four rectangular fields which were either red or blue and contained yellow dragons. The dragons were simply side views of the dragon figures of the new plume. This motif also appeared on the sail of the 6057 Sea Serpent. The Black Knights were also the first Castle theme that was equipped with oval shields and adapted the dragon from the triangular shields to fit the new elongated form. The oval shields were reused by the Dragon Masters, but then the dragon was coloured in green.

Other sets with Black Knights involvement