Game announcement! In Fall 2013, LEGO® Legends of Chima™ Online, a free-to-play, online world developed by WB Games Montréal, will provide kids with a safe and incredibly immersive connected game experience. Players will be able to build and customize their kingdom in the world of Chima™, explore massive environments like the Falling Leaves Forest, take on missions to help Laval and his friends, uncover hidden secrets and treasures, earn rewards, and use LEGO bricks to build weapons, gadgets, and more!

The player starts by customizing their character by first choosing there tribe, lion, eagle, gorilla, or bear, then choosing their torso, head, and leg color. After creating their character they will be taken to a small battle raging at a clearing. Laval will then tell the player how to move, attack, and use chi. After defeating a croc by using chi, Laval will have the player choose a three part name from a list of words. Then Lothar will tell the player how to open and use their backpack. 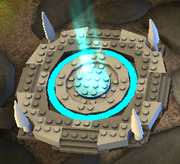