Mallock the Malign is a Castle minifigure introduced in 2010. He only appears in the LEGO movie, The Adventures of Clutch Powers. He is identical to Evil Wizard from the Castle theme. He serves as the movie's main antagonist.

Mallock the Malign's appearance is identical to that of the Evil Wizard. His legs are red and black and have many markings. These include a tooth and a crystal. His body his red with black hands and has markings showing his robes. The Evil Wizard has a black ragged cloak and a large collar type thing. Mallock has a white beard and a face with one red eye. On his head the evil wizard has a wizard hat with a skull halfway up.

The Evil Wizard once took control of Ashlar, and ruled unfairly, until the King Revet took action, and had the wizard put to prison. Soon, the Wizard, Squidman, and Omega, three prisoners in the same prison, decided to team up and escape. They managed to escape after outsmarting the Space Police inside the prison and Clutch Powers' Brick-Building Team, which were called over through a distress signal. The three criminals separated, Mallock returning to rule Ashlar. 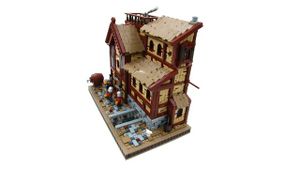 Mallock took power of the land once again, this time without King Revet to intervene. Only Prince Varen, wielding the Golden Sword, could beat him at that point. Clutch Powers and his team arrived on the planet, and quickly got together the kingdom of Ashlar to defeat Mallock. After Clutch finally persuaded the Prince, who was not very good in sword combat, an attack was staged, but Mallock's forces ultimately won. Clutch and Varen were imprisoned in Mallock's tower, after they failed an attack in his private chambers.

Soon, a second attack was staged, the two escaped, and a final showdown between the wizard and Varen and Clutch erupted. Clutch fought furiously, but was soon stunned after Mallock showed him an image of his missing father. Varen took the opportunity to win the battle, and finally have Mallock arrested.

Mallock was transferred from Ashlar to Kjeld Playwell's office, and what happened afterwords is unknown.