Peg Mooring is a marine biologist who worked for the LEGO Organization in the movie The Adventures of Clutch Powers.

Peg Mooring is one of the members of Clutch Powers' Brick-Building Team. She is calm, relaxed, kind-hearted, but sometimes can be bossy. She is also very intelligent and knows a lot of things to specific detail. She also finds an interest in Clutch. She is noted for discovering thirteen different species of aquatic life.

Shortly after being introduced to the team, Bernie came flying into the room they were in, making his hairpiece fall off. She came to his aid, and immediately he developed a crush on her.

Clutch Powers' Brick-Building Team was assigned by Kjeld Playwell to investigate the situation on Planet X4 after receiving a distress signal from the planets prison guarded by Space Police. They then embark on a long journey, which brings them from Planet X4 to the Kingdom of Ashlar, where they must all work together to defeat the evil Mallock the Malign.

They discover that the only way to defeat the wizard is through Prince Varen's usage of the Golden Sword. Clutch sets off to find the Prince and succeeds in doing so, Bernie and Brick come over a disagreement on how the Battle Wagon should be built, and Peg meets a dragon of which she befriends. This opens up to a battle scene where Clutch and Varen are captured, and everyone else flees. During the battle, she dressed up as the prince to motivate the soldiers, but in the end, it didn't work out so well.

After retreating from a losing battle, Peg finally puts everyone back on track after realizing a message in the sky (showing Clutch, cast by Mallock to intimidate them), where Clutch has written "LEGO". She takes this opportunity to take charge, asking Brick to create weapons and Bernie to create a good vehicle. Bernie doesn't feel good enough to do so, so she kisses him, fueling him with hope.

Soon, the trio rescue Clutch, Peg getting her dragon to melt the cage of which Clutch is stuck inside. Prince Varen then defeats the evil Mallock. Mallock is then put in prison, and the adventurers are given their next mission, finding the other two criminals. 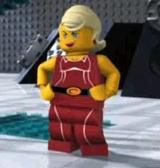 Peg's torso and legs are coloured to make it look as if she is wearing a red dress. Her arms pieces are yellow and her face is yellow. She has blue eyes, wears red lipstick, and has blond hair. She also has earrings, something female minifigs don't have. 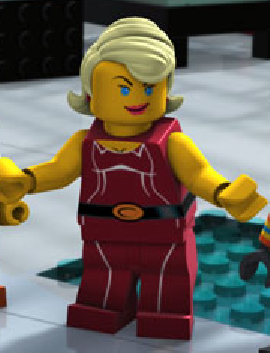 Peg Mooring's voice is provided by Yvonne Strahovski, an Australian and American actor.