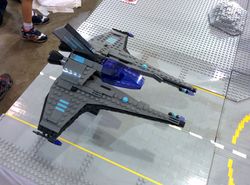 An example of a Vic Viper MOC at BrickFair.

A Vic Viper is a type of spacecraft characterised by its unique, parallel wings that sit in front of the cockpit, and that widen near the back of the ship. Weaponry such as blasters or missiles are often located in the rear part of the wings or between the open space in front of the cockpit. The name "Vic Viper" is taken from the name of a ship in the Gradius video game series.[1] The Vic Viper MOCing trend was pioneered by AFOL "nnenn," and has been featured in official sets such as 5981 Raid VPR and 7066 Earth Defense HQ.[2]