7782 The Batwing: The Joker's Aerial Assault is a set from the Batman theme that contains Batman's Batwing and The Joker's helicopter. Batman, The Joker, and Joker Goon minifigures are included. 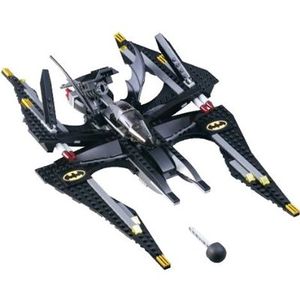 The Batwing vehicle is built very thinly using primarily LEGO plates instead of bricks. It has an opening cockpit that holds one minifigure and Batman's accessories. The Batwing also features opening wings and wind flaps on the wings. Also, when the wings are folded up, slide-out rockets can be seen and slid-out using small knobs on the sides of the wings. Another feature is that when the back of the vehicle is pushed down, a spring-fire missle fires. The Batwing can land on its unique stand, which is included in the set. 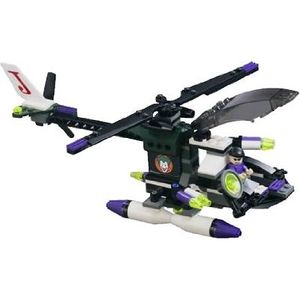 The Joker's helicopter features a large rotor above the main body and a small rotor at the end of the tail boom. It also stores Joker Bombs in the main body, which are able to be dropped by pulling a lever near the bottom of the helicopter. Another feature of the helicopter are hidden guns that are able to fold out from sides of the main body. It's opening cockpit is able to hold up to two minifigures and store weapons as well. On the side of the cockpit is a spotlight that, when hit by the Batwing's missle, will drop the rope ladder attached to it.

This set was made to represent a scene from the 1989 Batman film, in which The Joker tried to spread laughing gas throughout Gotham City while using his helicopter as a getaway vehicle. He is later stopped by Batman, who piloted the Batwing. At the end of the film, The Joker falls to his death when he fell from the helicopter's rope ladder.

This is a description taken from LEGO.com. Please do not modify it. Stop The Joker and save Gotham City™!

When The Joker™ and his goon take to the skies, it's up to Batman™ and the Batwing to stop him! Launch the Batwing's missile at The Joker Copter and stop the villain from dropping laughing gas on the city of Gotham!

$79.99 +
Released
January 2006 +
SetType
Regular sets +
ShopDescription
'Stop The Joker and save Gotham City™! … Stop The Joker and save Gotham City™!</br> </br>When The Joker™ and his goon take to the skies, it's up to Batman™ and the Batwing to stop him! Launch the Batwing's missile at The Joker Copter and stop the villain from dropping laughing gas on the city of Gotham!</br></br>* Open the Batwing's wings to reveal slide-out rockets!</br>* Launch the Batwing's missile at The Joker's hidden-weapons helicopter!</br>* Sleek Batwing measures 10" (25cm) wide and 15" (38cm) long!</br>* Hit the spotlight to knock the ladder and the crooked clown from the air!</br>* Batwing's wings opens to reveal slide-out rockets!</br>* The Joker Copter measures 9" (22cm) long!</br>* Includes stand for Batwing with flip-down ladder!</br>* Batman has lots of cool gadgets!</br>* Includes grey-suited Batman, The Joker and henchman minifigures.atman, The Joker and henchman minifigures. +
Theme
Batman +
Title
The Batwing: The Joker's Aerial Assault +
Txt1
Batman +
Txt2
The Joker +
Txt3
Joker Goon +
Type
Set +
USPrice
$49.99 +