8540 Vakama is a BIONICLE set released in 2001 based on the character Turaga Vakama. He is coloured red and orange and carries a staff. The set is identical to 1417 Vakama, but with different packaging. Pushing the lever on his back will cause his arm to move.

Turaga Vakama started his life as a Matoran, until he was given a Toa Stone, and was then changed into a legendary Toa. He later sacrificed his Toa powers to help revive all the Matoran of Metru Nui, who now lived on the island of Mata Nui, with their memory erased. Vakama then became a Turaga, one of the six wise elders and leaders of Mata Nui. After the Matoran and the island's Toa defeated Makuta Teridax, the six Turaga revealed to the Matoran about their past island, Metru Nui, and together, the Toa, the Matoran, and the Turaga returned to Metru-Nui, where they truly belonged. 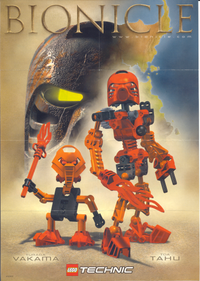 8540 Vakama resembles a small figure, with two arms, two legs, and a head. One arm is holding a staff. A mask is placed in his face area, like all other BIONICLE figures.

In the Mata Nui Online Game, Vakama is the first Turaga you meet. He is not the first character however, because after you enter the charred forest you can find a Matoran, and to enter Ta-Koro you also meet more Matoran.

This is a description taken from LEGO.com. Please do not modify it. (see an archive of the product's page) Vakama

Famous for his quick temper and great courage, Vakama is the protector of the legend of Tahu and is Turaga of the village of fire.

£1.99 +
Released
July 2001 (US) / January 2001 (UK) +
SetType
Regular sets +
ShopDescription
Vakama Famous for his quick temper and great courage, Vakama is the protector of the legend of Tahu and is Turaga of the village of fire. +
Theme
BIONICLE
Turaga +
Title
Vakama +
Type
Set +
USPrice
$2.99 +