Street Skater is an Online Game on the LEGO Collectable Minifigures site. In the game, the player controls the Skater, who can jump over bricks and duck under spiders. There are several levels in the game with different heights of difficulty. There are a total of five levels in the game. 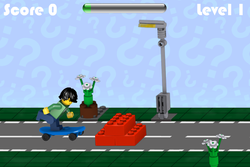 Bricks block the way of the player. Jump over them to get past. Some of the bricks fall down from above.

Spiders block the way of the player from above. Duck under them to get past. Some of the spiders can move up and down. Some spiders must be jumped over to get across.

The reward of this game are print-out paper ramps for the skateboarder minifigure.