The Ultimate Collector's Series, or UCS for short, is a toy line of larger sets. They are predominantly under the Star Wars bracket, but there are also three Super Heroes based sets in the theme; one under the original Batman banner, and two more recent Super Heroes sets. The UCS sets are meant to be more detailed than the average set and are and aimed at older builders. Originally, these sets did not generally include Minifigures, but there are some cases (such as 10195 Republic Dropship with AT-OT Walker) where the set is completely compatible. Ultimate Collector's Series sets tend to be larger, more detailed, and more expensive than typical sets. Commonly, Ultimate Collector's Series sets are given a 10xxx item number. Upon the release of 75059 Sandcrawler (and the return of the "Ultimate Collector's Series" banner which had been absent for some years) LEGO explained that minifigures would now be a common part of UCS sets, as they will strive to represent the pinnacle of LEGO sets, including minifigures and play value, rather than just models. 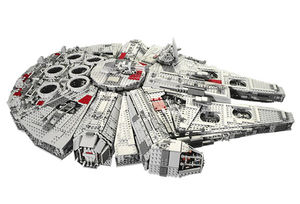