Cookies help us deliver our services. By using our services, you agree to our use of cookies. More information
Navigation
Actions
Reviews
Fan space
ShoutWiki messages
Wiki tools
From Brickipedia, the LEGO Wiki
(Redirected from Wood Toys) 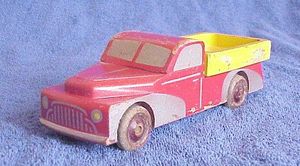 Wooden Toys is the name of the first theme of LEGO toys created. The first toy was created in 1932 and was exclusive to the shop owned by LEGO Creator, Ole Kirk Christiansen.

Beginnings of The LEGO Group[edit]

The LEGO Group began in the workshop of Ole Kirk Christiansen, a carpenter from Billund, Denmark, who began making wooden toys in 1932. In 1934, his company came to be called LEGO,[1] and expanded to producing plastic toys in 1940. In 1949, LEGO began producing the now famous interlocking bricks, calling them automatic binding bricks. These bricks were based largely on the design of Kiddicraft Self-Locking Bricks, which were then released in the United Kingdom in 1947. 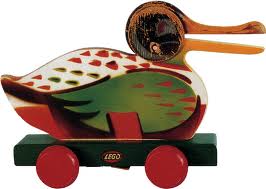 A profile of a LEGO duck

One of the first and best known products released by LEGO in the 1930's was the Wooden Duck. The duck was later remade in LEGO bricks as 2011 LEGO Duck. Another well known wood toy is Teddy Bill. However, there were many others. 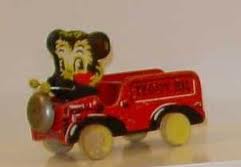 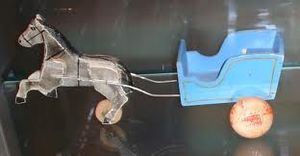 These sets ended production in the 1960's.

As the plastic toys started gaining popularity in the mid-1950’s, the production of wooden toys was scaled back. The few wood and plastic toys that remained were marketed under the name Bilofix in 1959 and all non-system toys were finally discontinued in 1960. On 4 February 1960, the LEGO department for wooden toy production was struck by lightning and burned down for the third time. After much consideration, it was decided to discontinue production of wooden toys and to concentrate solely on plastic toys. As a result, two of the brothers, Karl Georg and Gerhardt, decided to leave the LEGO company and start their own separate business, called BILOfix. LEGO had produced at least several hundred different wooden toys and plastic toys designs since 1932. In their 28 years of production, none of the wooden toys were ever sold outside of Denmark.

At the time, the distinguishing feature of the wooden toys was their high quality. The LEGO Duck specifically is a longtime symbol of the LEGO company's early years and what it represented.

Many of these toys and products can be found still in good quality in museums, particularly those in Denmark.