BIONICLE: Desert of Danger is a BIONICLE book released in April 2009. It was written by Greg Farshtey and published by Scholastic.

Mata Nui, having crash landed on Bara Magna, is lost in the middle of the desert. Having already encountered a creature, he is wary of potential threats in the desert, and is looking for the nearest city. Metus approaches driving a Thornatus, and Mata Nui requests a ride. The two introduce each other, and set off into the wastelands. 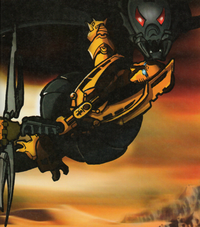 Mata Nui fighting the sand bat, one of the illustrations in the book.

Mata Nui notes the half buried structures and ruins in the desert, evidence of the cataclysm that occurred 100,000 years ago. As they approach a wide expanse of desert, Metus notices slight tremors in the sand, and realizes that a Sand Bat is about to attack. Metus turns the vehicle and flees, attempting to escape the creature. The Sand Bat eventually catches up with them, and rams their vehicle, knocking it over. As Metus attempts to right the vehicle, the Sand Bat attacks again, taking them by surprise. Metus starts to flee toward cliff-side caves, though Mata Nui wants to stand and fight. He enlists Metus' help in trying to knock the creature's mask off, only to be informed that creatures of this universe do not wear masks.

Mata Nui attempts to figure out a weakness in the Sand Bat, and notices that, despite its strong skin and speed, it never remains above ground for very long. He eventually deduces that it is weak to sunlight, and works with Metus to keep the creature in the sun. After the Sand Bat begins to be harmed by sunlight, Mata Nui lets it retreat underground, convinced that the Sand Bat will not bother anyone for a while. Metus, despite thinking that Mata Nui was foolish for letting the creature go, resolves to keep a closer eye on him, believing that he could learn some tricks from the new warrior.