Basic Figure is a type of mini-figure used from 1981 to 1991 in some of the Basic and Dacta sets designed for young builders (3+ sets). It suited the special needs of this age group thanks to its simplicity and safety, allowing children to use figures compatible with System bricks but without small interchangeable parts. 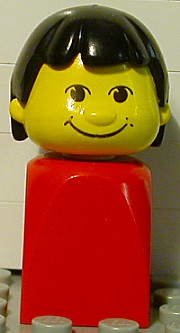 The Basic figure is made of parts which can’t be neither disassembled, nor interchaged easily. It comes in two major variations – a finger puppet and a human body figure – which both use the same headpiece.

Finger puppet figure The head of the figure yellow. Contrary to the regular minifigure it is almost round and it has sculpted nose and ears. The printing in black depicts round eyes with curvy eyebrows and a mouth in broad contoured smile. The headpiece can’t be separated easily from the body but it can rotate a full turn. On the top of the headpiece the hairpiece is also firmly fixed.
The rest of the body is reduced to a hollow cuboid with square 2x2 base and slightly narrowing top. There is no indication of limbs, not even of the front and back of the figure. The cuboid appears in two colours: blue and red.
The difference in figure’s gender is subtly indicated by its smooth hairpiece. The black hair is slightly longer than the brown one, hence the black-haired figure in red is considered to be a woman and the brown-haired figure in blue can be identified as a man.
The finger puppet figure is about the same height as a normal minifigure. 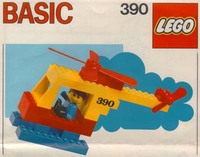 The head of this figure is round, with sculpted nose and ears. It is yellow with black printing depicting round eyes, curvy eyebrows and a smiling mouth. It can rotate full turn in its socket and it is topped with either a hairpiece or a peaked hat. Those pieces can’t be separated.
The body piece is the same as in normal Fabuland figure, which is made of five parts, all fixed firmly together. The torso is blocky and flat. At the back the waistline is slightly lowered, limiting the range of legs’ movement to 90 degrees. The arms are slightly bent in elbows, integrated with C-shaped hands and they rotate in sockets. The torso is connected to the legpiece by a hinge, allowing the figure to sit. The legs are straight, square at the tights’ level, cylindrical in the middle and flat at the base, so the figure’s feet resemble 1x2 plates. The legs can move separately a quarter of a turn.
The whole figure is about as tall as 6 bricks stacked up.