Child's Play is the eighteenth episode of Ninjago: Masters of Spinjitzu, making it the fifth episode of the second season. 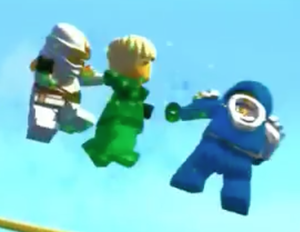 Lloyd defeats Jay and Zane with Spinjitzu while training.

On Destiny's Bounty, Lloyd is wishing that he was able to play like normal children, but is made to train with the four other ninja to improve his combat skills. Lloyd manages to take down Kai, Jay and Zane, but is defeated by an attack from behind by Cole. Jay senses that Lloyd is distracted and asks him what is wrong. Lloyd tells the other ninja that the latest issue of the comic book Starfarer just came in, and was on a limited run. Lloyd asks them if he could go in to Ninjago City to buy a copy, but the other ninja say that as the Green Ninja, he doesn't have time for such childish things. 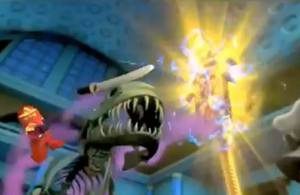 Kai throws his sword at the Mega Weapon, knocking it out of Garmadon's hand.

Nya then comes on to the deck of the Bounty, telling the ninja that there has been a break-in at the Ninjago City Museum of History and that Lord Garmadon was spotted on the museum's security cameras. The four ninja set out to stop Garmadon, leaving Lloyd behind out of concern for his safety.

The ninja, hiding on an upper level in the museum, watch as a group of Serpentine led by the tribal generals (excluding Pythor) move in to a room with a golden sarcophagus and a large skeleton on display. The generals talk about Garmadon, with Skales complaining that he hasn't successfully done anything since the Serpentine joined forces with him. Garmadon then steps out of the shadows, and all of the Serpentine bow to him, although Skales does so reluctantly. Garmadon describes to the Serpentine the Grundal, an extinct beast from long ago which was regarded to have been the most dangerous creature in all of Ninjago with its sharp claws and acute senses. He then announces that with the Mega Weapon, he will create the power to turn back time on the Grundal skeleton in the room, making it live again to hunt the ninja. 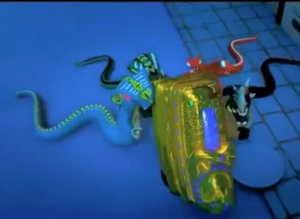 The Serpentine generals escape with a golden sarcophagus, but are forced to abandon it in their escape.

When the Mega Weapon begins to turn back time on the Grundal, the ninja attack, successfully fending off attacks from the Serpentine. Kai throws his sword at the Mega Weapon, knocking it out of Garmadon's hand. Garmadon retrieves the Mega Weapon, and, believing that he failed to resurrect the Grundal, orders a retreat. However, the four Serpentine generals choose to steal the golden sarcophagus being exhibited, and slither away with it. The ninja pursue the thieves, but they manage to easily get away. However, the generals discover that the sarcophagus will not fit down the sewer pipe to be used for their escape, and are forced to abandon it. 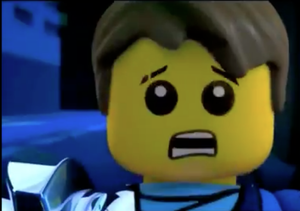 Jay realizes he has been transformed back into a child.

Wondering how the generals managed to get away from them so easily, the ninja eventually realise that they have been transformed into children, believing that the Mega Weapon had affected them instead of the skeleton. As they are discussing what to do, two Ninjago City police officers then arrive at the scene, and conclude that the ninja had stolen the sarcophagus from the museum. The ninja protest, explaining what happened, but the police officer do not believe them, thinking that they are "just a bunch of brats". After a failed attempt of Spinjitzu by Kai (and realizing they are too short to perform it), the ninja are then arrested, and told to return the next morning to the museum to explain why they stole the sarcophagus. 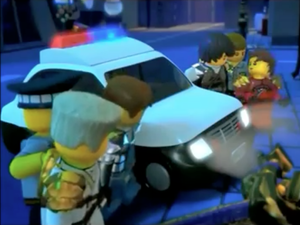 The ninja are arrested.

The next day, Sensei Wu and Nya become worried for the ninja's long absence and decide to search the city for them. Lloyd is left in charge of the Bounty while they are away, who is more concentrated on the comic he was reading than training.

Meanwhile, the ninja go back to the museum, and apologize to a member of the museum's staff for stealing the sarcophagus, so that they are able to be freed from police custody. The staff member accepts the ninja's apology, but asks what happened to the Gundal's skeleton. The ninja realise that the Mega Weapon must have succeeded in bringing the Grundal back to life, and escaped from the police by disguising themselves with clothes from the backpacks of other children on a tour of the museum. Shortly after the ninja escape, the Grundal leaps off the roof of the museum and runs off, causing panic to those in the area. 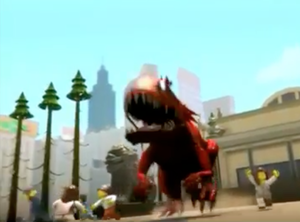 The Grundal at the Ninjago City Museum of History.

The ninja then use a payphone to call the Bounty, and the ninja tell Lloyd to meet them at Buddy's Pizza with their weapons. The four other ninja tell a surprised Lloyd of the past events, and that the Mega Weapon not only brought the Grundal back to life, but turned them all into children, and that they need to find someone who knows how to defeat the Grundal. Lloyd says that he knows someone who does, and leads them to Ninjago Doomsday Comix, a comic book store owned by Rufus McCallister, also known as Mother Doomsday. Lloyd asks Mother Doomsday if he would know how to defeat a Grundal if one existed. Doomsday tells the ninja that the only way to destroy a Grundal would be with light, and recommends using an Illumisword, an illuminated sword-shaped weapon, to defeat it. Mother Doomsday shows the ninja authentic replicas of the swords, and Kai says that they'll take them. However, Mother Doomsday says that the sword can only be obtained by winning a comic book competition which is about to take place, so the ninja enter Lloyd into the event.

Back on the Destiny's Bounty, Sensei Wu and Nya have returned from their attempts to find the ninja, and receive a message from Lloyd telling them what has happened so far. Wu and Nya then travel to Mystake's shop, and purchase a special tea, known as Tomorrow's Tea, which has the ability to make people older. 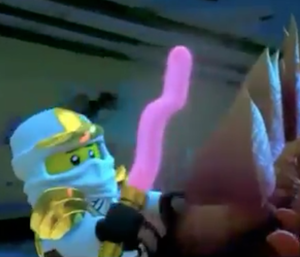 The ninja attack the Grundal with illumisword replicas, to little effect.

Lloyd makes it into the final round of the comic book trivia competition, however he loses on the final question, because the question was about the latest issue Starfarer which the other ninja didn't let him go and buy. The comic book store then loses its electricity, and the Grundal attacks. Cole, Kai, Jay and Zane grab an illumisword each and attempt to defeat the Grundal, but the illumiswords have little effect and the Grundal knocks the four ninja down. 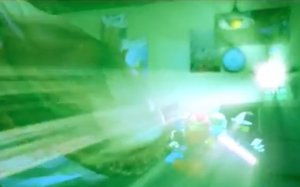 Lloyd summons green light to try to defeat the Grundal.

Then, Lloyd attacks the Grundal by summoning a green ball of light, but the Grundal manages to knock Lloyd down as well. Then, Nya and Sensei Wu run into the comic book store, and Wu throws Jay the bottle of Tomorrow's Tea, explaining that if he uses it, it will turn the Grundal back into a skeleton and make the ninja older. But, the ninja realise that it will also age Lloyd and that he'll miss out on the rest of his childhood. The Grundal attacks again, and the ninja except for Lloyd are all knocked down again, with the Tea falling out of Jay's hands and Lloyd catching it. Lloyd then uses the tea, which successfully turns the Grundal into a skeleton, and restoring the four ninja back to their normal age. Lloyd then gets up, revealing himself to be older as well, with new hair, a deeper voice and longer legs.

As the ninja leave the comic store to continue Lloyd's training, Mother Doomsday offers his last comic issue of Starfarer to Lloyd, saying he deserves it. Lloyd, however, declines the offer, saying he already knows how it ends and so joins the others outside. The last image is what seems to be Mother Doomsday's latest comic issue, entitled "Green Ninja", which reveals Lloyd facing his father in battle.

The two police officers were eventually arrested for accusing the Ninja of stealing the sarcophagus.