Energy Crystals, known also as Brickonium in some cases, are green, glowing gem/crystal-like power sources. Energy Crystals first appeared in Rock Raiders, and have appeared at various points since then.

Energy Crystals were dubbed Brickonium in the magazines, comics, sets and other sources, though the books and games just called them Energy/Power Crystals.

Energy Crystal patches appeared around the LEGOLAND game. After Professor Voltage traveled to the future, he discovered from Docs just what could be done with these. The player can then build Power Stations on top of these patches. 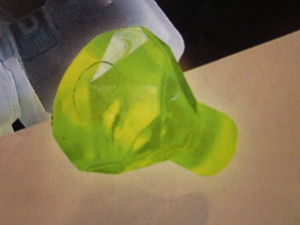 The Space storyline of LEGO Battles also has Energy Crystals, though these are gem-shaped again. It also introduces bright purple ones with ten times the power of green ones.

In Power Miners, the protagonists find the crystals underground after investigating the cause of a series of severe "earthquakes" responsible for the devastation of several cities on the Earth's surface. When they discover that these disasters result when the rock monsters consume the crystals, they begin an effort to mine and collect them, hoping to prevent future incidents. In The Adventures of Clutch Powers, they are also used as a power source, as demonstrated when Clutch Powers retrieves one for LEGO City.