Hot Rock Massage is the eighth episode of the third season of the Nexo Knights TV series.

The old Lava Monsters are back! And a new Forbidden Power is in the middle of their new village of Burningham. But whose side are the Lava Monsters on?

Aboard the Fortrex, Clay is training in his battle suit, once finished, Robin comments that out of all the knights, Clay is the most skilled with his suit. Meanwhile, Merlok 2.0 is struggling with memory problems and Ava is trying to help him out. Lance interrupts them to request that Ava fix his Knight Tab 5 (his tablet), because it keeps crashing. He becomes distressed at the thought of loosing his selfies he had on it. Ava looks it over and realizes that it has been poorly maintained and is full of viruses. Lance pays Ava to fix his tablet and as he's leaving, requests that she clean it as well, since he spilled soda on it the previous night. 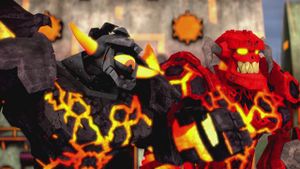 Jestro, the Cloud of Monstrox and the Stone Monster Army, stumble upon the town of Burningham, while searching for the Rogul guarding the Forbidden Power of Blazing Burn (which gives the user the ability to create and hurl deadly fireballs). The Rogul's location was supposed to be an uninhabited wasteland, yet Jestro and the Cloud of Monstrox are shocked to discover a town inhabited by their former Lava Monster Army. The Cloud of Monstrox, following the advice of Jestro, explores the town of Burningham to gather information on the location of the Forbidden Power. He encounters Sparkks and Burnzie, neither of which recognize him as the former Book of Monsters. Thinking he's merely a talking cloud interested in their town's history, they gladly explain how a town comprised of lava monsters was established. They recount the town was founded by the members of the Lava Monster Army who had nowhere to go after the destruction of their former base and the apparent demise of their former leader, The Book of Monsters. The lava monsters regrouped after The Book of Monsters defeat and began wandering the wastelands. They soon found the Rogul statue containing Blazing Burn, and were inspired to build a town around it. After putting in a lot of effort to create a home for themselves, the lava monsters realized that it would be wrong to cause destruction to other towns and decided to reject violence and destruction. Within the town the monsters take on civilian jobs, General Magmar is the mayor, Lavaria is a yoga teacher, Whiparella is a street artist, Bookkeeper is a glockenspiel performer, and Flama and Moltor work at the Hot Rock Cafe. After Sparkks and Burnzie fill the Cloud of Monstrox in on the town's history, he attempts to get them to give him the Rogul by explaining that he's a statue washing cloud and needs them to relocate the statue out of town, so he doesn't get any of the lava monsters wet. His plan fails when General Magmar calls him out, identifying him as their former boss. The lava monsters no longer want anything to do with Monstrox and wish to live in peace away from him. Whiparella uses her whips to create a gust, which blows the Cloud of Monstrox out of town. 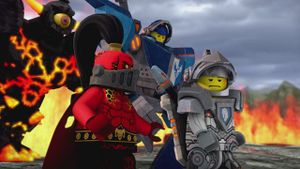 The Cloud of Monstrox regroups with Jestro and the Stone Monster Army and explains what happened. Jestro asks why he didn't use his evil lightning to control them. The Cloud of Monstrox reveals that he didn't think he would have to and becomes depressed at the thought of his former monsters rejecting him. General Magmar takes it upon himself to seek out the Nexo Knights for assistance. He does so by traveling to the Fortrex, politely knocking on its door and escorting the Nexo Knights to Burningham. The Nexo Knights decide to train the lava monsters to become better fighters, so they can defend themselves from the Stone Monster Army. Aaron trains Whiparella, struggling at first, but successfully motivating her to fight at her best through the use of name calling, using names such as "Whimparella". Clay gathers everyone to explain his plan to defend Burningham from the Stone Monster Army.

Roberto Arnoldi, inspired by the Cloud of Monstrox calling Jestro an "airhead" sculpts a flying vehicle, which becomes part of the mobile headquarters, shaped like Jestro's head. Jestro then leads the Stone army to attack Burningham, in an attempt to capture the Forbidden Power. The Cloud of Monstrox tags along too, though is still depressed that his Lava Monster Army, which he describes are like children to him, have rejected him. The Stone Monster Army quickly gains the upper hand and overwhelm the Nexo Knights and lava monsters. Jestro and the Stone Monster Army seemingly grab the Rogul, and return to Mount Thunderstrox with their stolen prize. Once they attempt to extract the Forbidden Power from the Rogul, they discover it's a fake. The Rogul is actually Beast Master in disguise acting as a decoy. Beast Master flees, returning to Burningham, leaving Jestro shocked by the deception. The Cloud of Monstrox gets over his depression through laughing at Jestro's failure, mocking him, then he proceeds to rain on him.

As per Clay's plan, the real Rogul is stored onboard the Fortrex so that the Forbidden Powers can be studied under the watchful eyes of the Nexo Knights. Ava returns Lance's tablet, having repaired it and restored all his selfies. She realizes that the memories Merlok 2.0 is trying to recover can be extracted from the Knighton Castle Library through a similar means to how she restored Lances selfies. Clay and Merlok 2.0 continue to talk to the knight they've selected as Clay's successor as leader of the Nexo Knights, though the knight's identity is left anonymous. In Burningham, the lava monsters celebrate their victory. General Magmar concedes that the Nexo Knights "aren't so bad", immediately afterwards the lava monsters playfully begin fighting with each other.