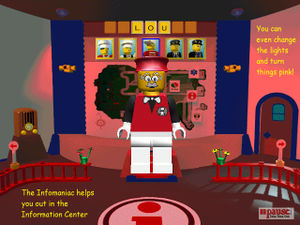 The Infomaniac, in the Information Centre

Infomaniac is the Creator of LEGO Island. He built the Brickster almost 40 zillion years ago. When he told the Brickster he was going to make a new Minifigure, the Brickster went ballistic, stole some bricks, and went into space to make his own island. The Infomaniac is the player's helper throughout the game and gives advice to you. He lives in the Information Center. In LEGO Island, he speaks to you through your headset, and can be found in the enter/exit game room (from which you can also teleport to certain locations and see video clips about LEGO Islanders). In LEGO Island 2, the Brickster stole the Constructopedia because he was asleep. He leaves the infocenter because of that, resulting in you being able to speak with him. In Island Xtreme Stunts, the Infomaniac helps the director film movies, and he can be found on the mountain at the first landing site.